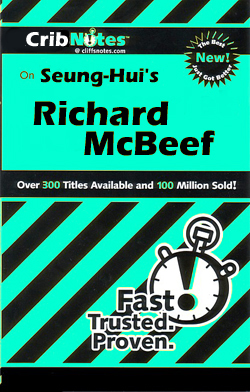 Richard McBeef, written in late 2006 by playwright Cho Seung-Hui, remains one of the greatest domestic tragedies ever produced in English. Originally titled State of Virginia Exhibit 14-A, Richard McBeef was not accepted by the public upon its completion. Similar to the initial release of Catch-22, it took American audiences a few years to warm up to the complex plotting and rich dialogue of Richard McBeef. Combining the post-modern techniques of Robert Coover and Don Delillo, the suburban theme of quiet desperation from Something Happened and Death of a Salesman, and a dash of Eraserhead, Richard McBeef was met with disapproval by a reading public who preferred books about dragons written by the children of people who own book publishing companies. Even The New York Times, famous for its scholarly reviews, called McBeef "utter pig shit," with guest columnist John Updike claiming, "The only McBeef Seung-Hui'll be familiar with after this stinker is at McDonald's. Because he's going to work there. And serve beef." Luckily, Richard McBeef has stood the test of time, and, five years after its original publication, is now taught in English classrooms alongside classics such as Romeo and Juliet and The Giver 2: Give Harder.

This guide is meant to give students a "leg up" on the competition in what we like to call the "School of McBeef." Whether you're new to Seung-Hui's bold, unforgettable characters, or a McBeef Veteran, you're sure to squeeze out just enough hidden meaning to write that dissertation you keep putting off. And be sure to keep a look out for Professor Symbolism von Metaphor! That nutty goofball will be popping up here and there to teach you important literary definitions in his own special way. Oh, Professor Metaphor von Symbolism, what won't you find subtext in?

Richard McBeef - The breadwinner of the McBeef family, haunted by his mysterious past as a CIA janitor. Did he kill John Lennon and Marylin Monroe? What is his connection with John's biological father? Can he withstand the assault of cereal bars and chainsaws inherent in his new life?

John - McBeef's step-son, a precocious young boy scarred by the mysterious boating death of his father. John's clever wordplay is one of Richard McBeef's most outstanding qualities, with quotes such as "You giant tree trunk piece of ass" immortalized on youth-oriented t-shirts around the world. Is John telling the truth, or is he trapped in a world of lies only he can discern? This mystery is what has won McBeef so many fans.

Sue - Richard McBeef's wife and the biological mother of John. A hysterical woman prone to suggestion, perhaps portrayed most famously by Hilary Swank in the film adaptation of Richard McBeef. With Sue, Seung-Hui bravely creates a clearly insane woman who doesn't lack a quiet sort of dignity. But are Sue's mental problems from the anguish of losing her first husband, or the result of a slow-acting CIA poison

Summary: The stunning first page of Richard McBeef paints a picture of domestic turbulence, with the normally-important meal of breakfast being undermined by the hostility of the stepson-stepfather relationship. Seung-Hui introduces us to John, a small, nebbish boy with sharp features, to contrast with Richard McBeef, a large, red-headed, tree trunk of a man. As John chews on a cereal bar, Richard McBeef attempts to open up the lines of communication with his estranged stepson. But John will have none of this. Note the crossed legs of Richard Mcbeef in this scene, which represent his emasculation at the hands of his wife, and the cereal bar John is eating, which symbolizes something you could eat for breakfast. John's use of "bud" when talking to McBeef playfully subverts the father-son paradigm.

When you think of Richard McBeef you think of a number of things. One is beef, which is hard to escape, given the subject matter! Another thing is foreshadowing! Foreshadowing is a literary technique used to hint at things to come. For example, if I were to eat a seven layer burrito at lunch, I would exclaim, "Looks like I'm going to foreshadow all over the back of my toilet seat tonight!" Keep an eye on the cereal bar introduced on this page! It's more than just a delicious treat filled with some kind of dehydrated milk I gather astronauts are forced to eat against their will. Yum!