Dekadens' Vore & Furry Realms, submitted by me.You know we are in troubled times when terrible Internet subcultures like the furries, the worst of them all, have even worse subcultures within their own subculture. By far the worse kinds of furry is the "roleplaying vore furry". Not only do these clowns like to dress up like skunks and roll a 20 sided die to see who gets to hump each other, they also fantisize about eating people, or getting eaten alive. They're called Vorarephiles and apparently they go hand in hand with furries because we all know animals like to eat each other while ejaculating. 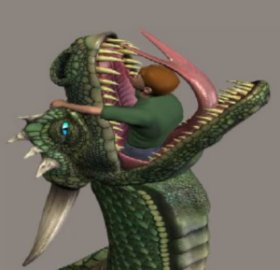 This guy/wolf/waste of carbon Dekaden is just an example of what's wrong with the Internet today. When his parents gave birth to him, what would they have done if they'd known they just spawned a defective child who would grow up to think he was a wolf and masturbate to the thought of eating naked women alive? Probably do what any socially conscious parent would do and drop it down the nearest well. What pisses me off more than anything about this site is that the main page plays a midi of a song that is on the Last of the Mohicans soundtrack, a song that I really liked. Now I will never be able to hear it again or see the movie without thinking of a fox with a hardon stuffing babies in its mouth.

Don't forget to check out the message board (if your eyes can stand it for more than 1 minute), and the forum. I'm sure they'll be happy to hear what you think about their website and the helpful suggestions I'm sure you'll all make.