Ellie Crystal's Metaphysical and Science Website, submitted by Andy. Ellie Crystal is many things. Psychic, researcher, therapist, reiki master, and HTML programmer, along with a slew of other titles that amount to "person who has no real job, but manages to con people out of their money by being convincingly out of her fucking gourd." Ignoring the fact that the phrase "metaphysical and science website" is grammatical suicide, this site also has a number of other things going for it that lend considerable weight to a theory I'm going to introduce to you now: Ellie Crystal is completely insane. Just how insane, however, is somewhat difficult to say. She actually makes a lot of sense, just so long as you're capable of swallowing an overload of crap about aliens named Zoroaster and how we're all trapped in a computer simulation.

It's unfair to just condemn Ellie Crystal without getting to know her. So here's a taste of her bio:

At age eleven my journey into metaphysics began like a chapter out of a Science Fiction novel. An unexpected trip with my mother from Brooklyn, NY to Reno, Nevada, in April of 1954 would change the course of my destiny. Somewhere in the desert, at dusk, the sun setting behind the mountains in colors of red, pink, orange, and blue, two entities from another realm appeared to us. There I was all of 11 years old - somewhere between childhood fantasies and teenage adventures. I remember being asleep in the back of an old Ford on a cross-country journey from Brooklyn to Reno.

The car paused on a dirt road and we got out. My mother and the driver of the car looked frozen in time, yet I was not scared.

You know, I may be going out on a limb here, but if I had to hazard I guess I'd say this could have something to do with the fact that she was asleep in the back seat.

A diamond ship of light appeared to me, as if a space ship.

Space ships, of course, are known for their particularly distinct method of appearing to people.

It was a projection, as are all things in our reality.

So there was really no point in mentioning it, was there?

Two entities, came forth from the ship - a male who called himself Zoroaster and a female. I was told of a future in which I would help shape the destiny of the souls of this planet. My work would be linked to pyramids, time, a book, and Zoroaster, later called Z. As their projected images dissipated 'right-time' returned. Later I was to learn that Z also played the roles of many prominent characters in Earth's history, including Thoth the Egyptian Scribe, who was Hermes - Hermes Trismegistus - the Emerald Tablets of Thoth - 'As is Above, So is Below' - which is the story of the Alchemy of our movement through consciousness and time.

Well, okay. You follow all of that? I got a little shaky toward the end, to be honest. At least things clear up later on in the bio. For instance:

Z taught me about grids and how to 'grid travel' to realities beyond our own. I chose not to tell others about Z as in the 1960's no one would have believed me. The frequency for understanding beyond 3D was too low. It would take the Internet to bring the multitudes in awareness through the sharing of knowledge and the process of healing one's issues.

My apartment has many portals through which spirits visit, especially as I talk to souls who have crossed over. 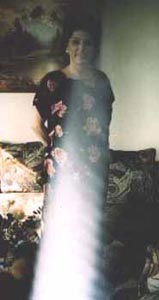 Now, I don't know if the above text and that picture are supposed to be connected, but if they are, that's the worst excuse for a spirit I've ever seen. And if they're not, that's a godawful photograph. But this is just the tip of the iceberg that is Ellie Crystal's severe mental problems. She has well over 2,700 documents unraveling every mystery of mankind and explaining just what existence really is. Naturally, only about every fifth word makes even the slightest bit of sense. Not a lot of sense, mind you, but a slight bit. In the grand scheme of things, that's a decent start. After all, without that little saving grace, this site would just be another massive depository of moronic theories and bullshit explanations of things that no one really cares about. And then where would we be?