Tuesday, Oct 21, 2003 by Rich "Lowtax" Kyanka (@TwitterHasBannedAllMyAccountsEver)
Know of an awful site? Send it to us and become a hero!

My body weight, submitted by DrMagus. The government is responsible for a lot of evil things such as unfair taxes, CIA assassinations, and those hilarious 1960's black and white movies which explained how you could survive a nuclear holocaust if you put your arms over your face and ducked under a kitchen chair for a few minutes. However, "Evidence Timeline" is dedicated to the most nefarious, vile plots our government has engaged in, ranging from "using an imposter to censor aspects of somebody's livelihood" to "manipulating the media through stolen time-access." These things are both very very very very bad and very very very very wrong, so if you ever see the government walking around the streets, you should let it know how much of a jerk it is. 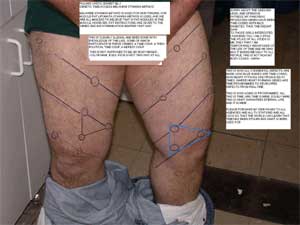 Stolen use of time has been use to time-synch people in my life, even to time-synch events in 1983 Biscayne Chemical to trigger BATF, FBI on my life, whom have made themselves part of my life, as friends, business man, girlfriends, flames, spouses, wives, co-workers, etc.

Only that such agents al have ear pieces and is very easy with a single broadcast to sequester them all away from me, thus if my entire list of friends results from these people planted in my life with false time-synched actions of justice, then is v very easy to remove my entire supporting structures, for all they have to do is infer to them me been investigated or sequester for testimony or alike, or coming trial and all social structures removed, thus is very easy to ruin anyone socially with premeditation and intent to discredit, ruin, sandbag, impoverish, derail, entrap, try to handout entrapment money bags, even when all evidence shows to innocent

Oh holy shit, no! Not the old "time-synch people in my life" trick! That's the pits, man! I once saw David Blaine try that time-synch thing and let me tell you, I'd hate it if somebody did it to me! Seriously though, this guy is absolutely Loony Tunes nutso, and I really hope that he's updating his little psychopathic website from a maximum security prison, as it's only a matter of time before he figures out how to load and take the safety off his assault rifle, thereby ventilating the demons who haunt him by doing such wicked things as delivering his mail and offering him a free sample of a smoked meat log in Hickory Farms. I mean, look at this shit:

My own mother and father made to derelict my character, my own mother in law and wife also used ,all my relative entrapped with leis said about me by an impostor occupant of the USA Presidency

Argentina and Cuba history mined by coup d'etat, both countries history made in one second of time, same as the entire AD timeline

Impostor, who stole time, formed Governments, made itself a general, a President, a director of law, now has used those falsely formed procedures and methods of law to use against me.

In fact, such impostor is now saying: "Roland say you are with any country, say you are from Russia or British, and don't worry is all part of M.A.C ( Muti Agency Coordination), if you were to go this way we will land over 30 million or more on you verifiable anywhere..

My answer is a NO and a bad word , each time, and "if you have lie about me to steal time, like thieves you are, I intent to make sure the whole entire world knows the truth. I have not ever been with any USA agency at all, or any other country, and y time traces and brain thinking logs shows that. then bad word I say back to the criminal agents of law trying to do anything to hide the very own fact that they have inception ally perjured and lied about me having been what I am not ever been, and now are using time to retro engineer events around my life to try to make their lies stick...

One thought, I WILL NOT EVER LET YOU GET AWAY WITH HAVING SAID A LIE ABOUT ME, NOT WHILE I AM LIVING, AND I INTENT TO LIVE MORE THAN ALL CRIMINAL, THIEVES, CROOKS, LIARS, FELONS WITH BADGES AND COMMISSION OF MILITARY, EXECUTIVE AND LAW

PS: Make sure to check out the correlations to the Bible (completely incoherent), pictures of his body which have been changed through the procedure of "time accessed gene staining" (makes no sense at all and additionally features 2048-pixel wide images of him pulling his pants down and writing all over his thighs with a Bic pen), and his argument detailing how OJ Simpson proves there is no God (absolutely psychotic). Somebody please get this guy put on the FBI watch list.