Kandor's Scissor Korner, submitted by Tim. You know it's a bad sign when the first line of text on a site explains the hideous purple background thusly:

The colour, of course, is the warm, rich purple hue that Kandor's head goes under extreme scissoring.

Uh... huh. With a name like Kandor, you might expect this site to belong to a furry claiming to be a thirty-foot tall scaly transsexual koala bear with laser eyes, or even a particularly whiny goth. But miraculously enough, you'd be wrong, proving that there is a God. However, you would soon learn that Kandor is just some freaky guy who gets off on having women try to fracture his skull with their thighs, proving that God is a wrathful deity who hates us and wants us all to be miserable.

Kandor's Scissor Korner has disturbingly massive archives of pictures and stories of women crushing people's heads between their legs. You'd think it would be a topic that would sort of fizzle out after the first hundred or so pictures, but they just keep going and going. 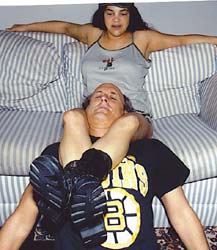 Even after all of that, the most remarkable thing about Kandor's site is that he actually expects you to pay to see even more of this crap! You'd think this would be a rare enough fetish that there wouldn't be anyone interested enough to actually pay money to see more than the already freakishly extensive free galleries, but you'd be wrong and you'd make Jesus weep. Yep, Kandor's got a little business going for himself here. But he's not an unreasonable man. He knows that not everyone can just shell out ten bucks a month for their scissoring fix. He's very willing to give out free memberships. All you have to do is write a scissoring story or send him some new scissoring pictures. And if you're a woman, there are even more options available to you! You can appear with Kandor in a new scissoring video, or pick up some cash through Kandor's scissoring challenge!

Hello, all, Kandor here. As some of you may know, I have something of a reputation for having a very hard head and one stubbornly resistant to scissor submissions. I almost never give in to straight headscissor, i.e., thighs or calves locked across the ears, face, temples. Only when the adductors of the thighs or interior of the calves slice lower into the carotids do I run the danger of passing out (and have, on several occasions, being a stubborn, albeit stupid man). That said, I issue a challenge to all women with two legs (one would be hard to put on a scissors no?): Make me submit to a straight headscissors and I will give you one million dollars. Now that I have your attention, I'll be honest with you: If I had a million bucks to toss away, would I be running this website? I think not. But all attempt at humor and attention-getting aside, let's make it something I can afford, if only barely - 50 bucks.

Now I know what many are thinking, that any bodybuilder out there worth her steroids could easily make me submit to a straight-on headscissors. But I beg to differ. I'm telling ya, a headscissors on the head - not the neck - will not make me submit. I also know many are the female bodybuilders on the circuit who won't bother to take this challenge, figuring I'm just in it for a free squeeze, and they'd rather have me pony up the usual 300 bills for the honor of being crushed. And that's fine, but if I had 300 to toss around casually, not to mention a million, I'd do so gladly. But I'm a man of limited means (divorce will do that to a guy, ask any of the 60 percent of us out there paying through the ass for child support), so it's a pretty straightforward if not highly paying challenge.

And it's not limited to bodybuilders. If any woman is reading this, or more likely any woman's boyfriend, spouse, brother, uncle, significant other, etc., the same challenge applies (to the woman, that is, not the boyfriend, spouse, etc.). The lady puts me in a straight headscissors and gives it her best. I submit, she collects a quick 50 for very little work. She doesn't get a submission, I go home 50 to the good and a happy, scissored idiot!

Now that's an offer that's just too good to pass up! Oh wait, no it's not. I was accidentally thinking of every other offer I've ever heard in my entire life. My bad.