Tuesday, Jan 06, 2004 by Rich "Lowtax" Kyanka (@TwitterHasBannedAllMyAccountsEver)
Know of an awful site? Send it to us and become a hero!

hot wild passionate sex, submitted by Miriam. Jacqueline Marie Zierman claims she was raped on July 17th, 2003 in room number three of the Watts Hotel behind the 7-11 in Everett, Washington. She has decided to inform the public of this sordid event by repeatedly spamming her website's URL through various Yahoo chat rooms, a technique used by many officers of the law when trying to solve important cases. While rape isn't humorous by nature (unless a man is getting raped by a woman or the person getting raped is a clown), Miss Zierman goes on to plan her upcoming rape on July 17th of 2004, advertising it as "hot wild passionate sex" and decorating her webpage with highly festive hearts. She instructs us to "dress like a prostitute" when attending and even includes a detailed address of the upcoming rape location. The weirdness doesn't end there, however, as Miss Zierman has written long, rambling, insane poetry about her rapist "Kenny" and how she hates him and, oh yeah, also wants to have sex with him again because she thinks he's hot. 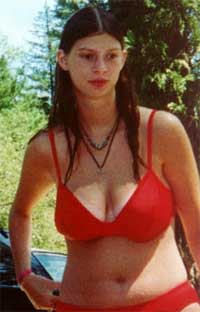 i fear he will kill me if he sees me near
and once alone with him he will rip the lace off of me
and look me in the face knowing that i gave it to him
i will not win the situation
and he will rape me anyways in sin
take me to his bed where i will wake in the morning
and be able to escape the heartache, the pains
and him mostly to blame if i ever went insane
for his misjudgements laid out on me
like his body holding me down
when i finally thought i had moved on
but then dawn shattered with no light to see his eyes
he will fuck me again if i dont watch myself
and i will be the one who sins

dear kenny,
i would have done it willingly,
i wish that things could have been differently between us
im sorry for the way i delt with it
i was scared and i dont know what really happened that night
my mind is so confused that i dont know what to think anymore
i just want to let you know
that you will always be on my mind and in my heart as well
even though you probably want to kill me by now
and you probably hate me as well
i know that you are probably very upset with me
but baby you are so sexy and i would fuck the living shit out of you in an insant

To make things better, Miss Zierman admits to smoking crack the night of her "rape" and writes extensively about her love of ye olde rock in her nutty disjointed poetry. Oh, and if you're curious about her interests, here you go:

I see a promising future ahead of you in the entertainment industry, my dear! Please ask Fox when the next episode of "Cops" will be filming in Washington.

PS: The crack whore has a guestbook you can sign. Please don't rape its bandwidth. Oh ho, I can't believe I cracked such a clever joke.