The Fuccon Family, submitted by Mikey. This is the official English site for "OH! Mikey". Since the best part of that update above was the screenshots I included from the DVD I figured some of you might be interested in seeing some more. It's a hilarious and in many ways terrifying show and you can look forward to a review next week. In the meantime, meet the Fuccons. 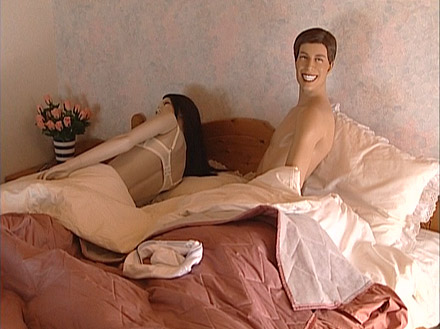 Mikey is a typical American boy. Having recently moved to Japan with his parents, he now attends American School, and spends his free time playing (or getting in trouble) with the other students at the school. Currently he has a crush on young Emily, a classmate of his, who has similar feelings, but love is far from simple for even the younger generations as the two are caught up in a complicated love triangle involving Laura, Michael's slightly older cousin from the U.S. who came to visit and hasn't yet returned home. (Despite the fact no one knows where she is living.)

Their dead eyes and gigantic smiles terrify me.