Minverva Walker Home Page, submitted by livingfruitvirus. This is the wonderful web site for an African American Christian TV sitcom being animated by a lone crazy white guy who thinks an important aspect of being Christian is including a lot of weird nudity and sexual themes in his all black person show. 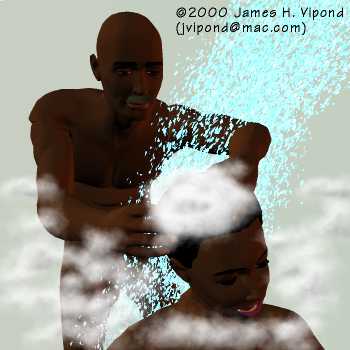 The Evangelical Adventures of Minerva Walker is a planned animated television sitcom, originally conceived as a newspaper comic strip, about an African-American family living in South Dakota. My basic intention is to create a series similar to Davey & Goliath, but more comedic and without a dog that speaks human language. (It would most likely resemble an African version of Wait Till Your Father Gets Home). I feel that my usual drawing style is appropriate for the medium of animation, but at present I am using Poser 4.03 (recently purchased from MetaCreations by Curious Labs) to create characters and scenes. I have completed a pilot script, and have begun a list of probable episode plots.

While you're visiting this site be sure to check out as many links as you have time to. Every single one yields an unending stream of comedy and is slightly disturbing.