Saturday, Jan 10, 2004 by Corin Tucker's Stalker (@DennisFarrell)
Know of an awful site? Send it to us and become a hero!

The Amazing Hoverdisc!, submitted by me. You might have seen today's ALOD on television before. The Hoverdisc is an amazing flying saucer of delight and wonder, and maybe magic. It DEFIES GRAVITY by floating, presumably using stolen alien technology. The name of this technology? Helium. That's right, the Hoverdisc is just a balloon. But unlike normal balloons, you pay $20 for it! Because it's magical. 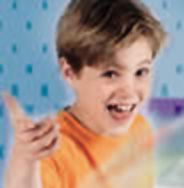