Total Kaos, submitted by Jordan. Time is a funny thing. Just as the baby boomers grew up and had children of their own, so are the fans of the eternally annoying Insane Clown Posse growing up and making eternally annoying white rap bands of their own. Total Kaos is just one of many of these bands, but we have chosen to shine the spotlight on them in particular because (A) someone sent me a link to their site, and (B) they really, really suck. 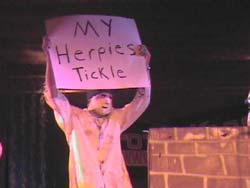 Total Kaos is comprised of four white, white members: MC Wicked (the tough one), Blunt Daddy Dolla's (the hilariously fat one), Don Ganja (the confused one), and The Madman (the useless one). The first three of these fine, upstanding gentlemen all refer to themselves as lead MC, while the Madman is left working backup vocals. You can learn all sorts of interesting facts about these four diverse and talented young men right here, including their musical influences, favorite wrestlers, and much, much more. Only two of the four have actually filled out their complete bios, so we only know for sure that two of them feel they were musically influenced by ICP, but since the other two share the email address of EBWJuggalo@aol.com, well, we can just assume.

Now, the band's first full length album is still in the works, but you can listen to a couple of their soon-to-be smash hits in their audio section. I'm personally partial to the song "Bitch HA!" which contains the catchy chorus:

The song also features WAV. files of gunshots and stupid "evil" laughing. It's really all you could expect from a song about killing your girlfriend, which is to say it leaves you feeling secure in the knowledge that none of these young men would have the slightest idea of what to do with an actual woman. They probably practice getting to second base on Blunt Daddy Dolla's's jiggly manbosom. The rapping follows the typical AABBCCDD pattern found throughout European poetry and among rappers who have trouble coming up with more than one rhyme at a time. It's basically a confused jumble as the four juggalos desperately try to emphasize certain words at the same time, but continually throw each other off the beat. It's really quite the experience. I suggest you all give it a listen. This is a band on the rise, my friends!