Cast Fetish, submitted by raven42rac. Last week, when I went on such a rant about disturbing and bizarre fetishes that the internet has brought into the public eye, I somehow managed to delude myself into thinking that I'd be able to go a couple weeks without coming across a new one. Sadly, such was not the case, and now I stand before you a broken and miserable man. Allow me to suppress a shudder and introduce you to the world of the cast fetish.

Sweet Jesus, that should be enough to send any reasonable person screaming into the streets. This alarmingly large website is members only, so if you want to see the full range of the perversion, you'll have to shell out at least twenty bucks for a one-month membership. However, as a casual viewer, you can see some sample pics of women in various casts, you can check out the promos for the women-in-casts DVD's, and you can even take a look at some of the absolutely gorgeous women-in-casts artwork, such as this beauty: 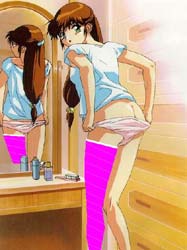 I guess I understand how this fetish could come about. It's the helplessness angle, to be sure. But if even if submissive women turn you on, there is no way in hell that fantasizing about people in casts is not wrong. It's the sort of thing that makes me want to just give up on humanity and go jump off a building. I'm just afraid that I might survive and end up in a full body cast, which would cause all of this site's subscribers to ejaculate on sight.

If you'd like to see the cast fetish community at work, you can check out their message board, but you'll only be exposing yourself to shit like this, regarding a recent photoset that appeared on the site:

Very nice LAC on Mandy. I love how the wrist is bent downwards. I have been hoping for years that someone would do one like that.

Fear for your children and their easily broken bones.