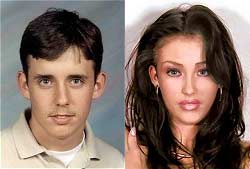 Finally, a site for those of us who want to throw our masculinity out the door and embrace the glamorous world of womanhood, rich in dish soup choices and cleaning methods to master! I myself do not want a doctor to saw off my penis and then drill a hole where it used to be, so I take comfort knowing that there is a site that allows me to explore my hidden female desires without doing any permanent damage. Actually, I take that back. I am uncomfortable knowing that there is a site out there where men can pay to have somebody spend a few hours airbrushing over their pictures to make them look like women. I don't know what's worse – the fact that there is apparently a market for this sort of thing, or that there is somebody out there crazy enough to cash in. While it is somewhat comforting to know that George Bush doesn't look any less Texan as a female, I fail to see why somebody would spend his or her time doing such a thing. But then maybe that's because I don't have gender identity disorder and am comfortable knowing that my failures as a man does not mean I would make a better woman.

In case you're interested in this wonderful world of guys dressed like women, perhaps some stories would entice you. Maybe this saucy exercise in gender bending:

Married Couple Sam and Joy move to the Pocono Mountains where they discover a family artefact known as the Pocono Moonstone. The Moonstone's special powers of transformation are revealed to them in a series of events that feature a guy who becomes a gal and gals that become girls.

That's just the description, and I could not bring myself to actually click the link because frankly, I like my transvestite stories to be a little more grounded in reality. You kids can have your fantasy and fiction, but I'll have none of it! They also have a feature that makes Photoshop Phriday look like a truck stop toilet. Using state of the art technology, they modify dozens of steamy old romance novel covers so that are about transvestites. What more could you want? I myself would like random pictures with painfully unpleasant captions added to them for no reason, but that's just me. Also, I'd like to be shot.

Edit: Apologies for everyone who saw this as blank for most of the day. My write-up got eaten by some bizarre glitch monster.