Monday, Mar 08, 2004 by Jedidiah (@notoriousamoeba)
Know of an awful site? Send it to us and become a hero!

The USS Valiant, submitted by Herring Carstairs. These are the voyages of the USS Valiant. Their continuing mission: to discuss Star Trek, wear embarrassing costumes, and boldly go where no nerds have gone before. The USS valiant is a Star Trek fan club, from scotland no less, that meets every week to discuss, I'd imagine, such riveting topics as William Shatner and women, both of which would run away screaming if they met these nutballs. This site chronicles their downward spiral into dorkdom with photos, fictional profiles of the members, and did I mention the photos? They're really quite precious. 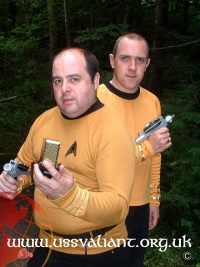 This ship is the star of the season six episode of Deep Space Nine, The U.S.S. Valiant.

A cadet crew took charge of the ship and headed into war picking up Nog and Jake Sisko along the way.

It just occured to me that trekkies pretty much exist for the sole purpose of making the people around them feel better about themselves. This site should be put in a glass case labeled "Break in case of low self esteem".