The goblins and kobolds are on the prowl once again! That can only mean the time has arrived for another special Halloween SWAT!

Dr. Thorpenstein: Boooooo! Hello there, boys and "ghouls," are you ready for some freaky Halloween fun? Get ready for a night of fright with these "hilarifying" real-life costumes! Don't get too scared, or you'll have to call your "mummy"! Muahahaha!

Zackula: Frights to see you! After many months beyond the grave, Fashion SWAT has clawed its way back with this terrifying spooktacular to chill your funnybones! Wooooooohoooohooooo! Fangs for reading! 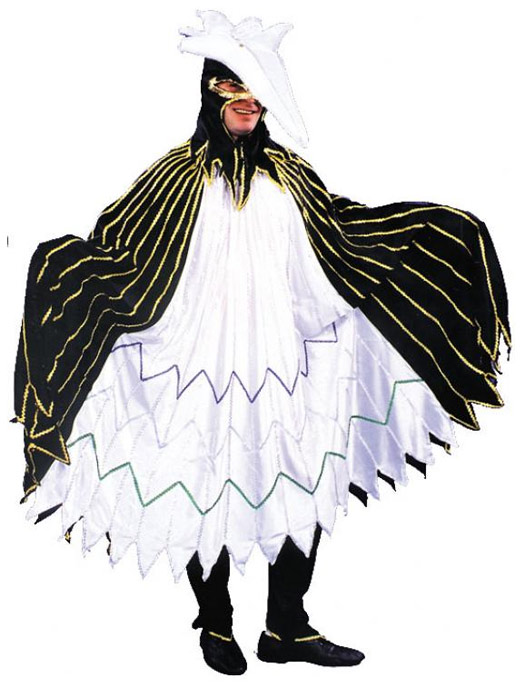 Exquisite, beautifully made of 100% nylon knit

Zackula: Hey, awesome, it's one of those great costumes where you get to spend all night explaining what you're supposed to be.

Dr. Thorpenstein: Usually a costume like this is one of those clever things where people say "so what are you supposed to be?" and you're like "I'm a [terrible pun], get it?" and they're like "ohhhhhh!" and you both have a good laugh.

Dr. Thorpenstein: This is just a joke with no punchline.

Zackula: It's a confused and confusing tragedy.

Dr. Thorpenstein: Halfway through the night you'll start coming up with lies about it, like "yeah, my kid made this, he was really into it so, you know, I kinda have to."

Dr. Thorpenstein: Or "I am mentally retarded."

Zackula: It's one of those costumes your grandma might come up with. "Grandma what should I be for Halloween?" "Oh, I saw the most amazing bird out the window yesterday. Let me get you one of your grandfather's old car covers and put some piping on it."

Zackula: "Let's just flatten out this angel tree topper and you can put that on your head!"

Dr. Thorpenstein: The top just looks like a cow skull or something, like you're some kind of obsolete Native American god from the Southwest.

Zackula: The sort of god who even when people believed in him he didn't do much. Like he stole the clouds on clear days or blew on the streams to make them cool.

Dr. Thorpenstein: Seriously though, can you even wrap your head around the idea that they mass-produced this thing? Like, they made a bunch of them in a factory and expected to sell them? "Sure, we could pump out some more Darth Mauls, but the smart money this season is on the heron."

Zackula: I'm pretty sure it's just parts of something else. Like they took a bunch of panchos that got recalled because they caused cancer and then glued insulation from a car door to the top.

Zackula: It definitely has the feel of "found" or "surplus" materials.

Dr. Thorpenstein: Some little Taiwanese kid is pumping these out for five cents an hour right now, but that's not even the real tragedy: the tragedy is that this now constitutes some small part of her understanding of American culture.

Zackula: Give it a hundred years or so and someone somewhere will be worshipping a robotic "heron."

Zackula: It's the sort of stuff they'll yell when we invade their asses.

Dr. Thorpenstein: Or maybe we just fill their minds with this sort of garbage so they'll fail citizenship tests when they come over here. "What? Nothing about the heron? I spent all night studying the heron shit."