The Sex, Death, and Travel Trilogy

Thursday, Apr 22, 2004 by Jedidiah (@notoriousamoeba)
Know of an awful site? Send it to us and become a hero!

The Sex, Death, and Travel Trilogy, submitted by Blackie. Former male stripper, Morgan D. Rosenberg, declares himself sexual adonis of the 21st century, writes page after page of rants about how all the women he's slept with are stupid whores who can't satisfy the cravings of his gargantuan penis. By studying Nelly lyrics, I think I finally understand what sex is. I clicked on this site expecting sensational tales of sex on the hoods of cars in the pouring rain. Instead I got a bunch of crap like this: 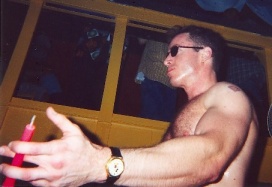 Before moving onto either the new sections or reading the last update (below), let me address two items of business. First, I was recently blown off by a woman named Karen Doyle. I know, I was surprised too ... this is ME we're talking about, after all. I, of course, don't condone my minions ... um, I mean "fans" ... committing acts of revenge in my name ... but if you do, I want to hear all about it. Her home address is:

TRANSLATION: BOO HOO GIRLS ARE TOTALLY MEAN AND STUFF! Pretty much all of the site is like this. It's almost emo in its whinyness.

My beloved Katt. Our marriage lasted a grand total of 6 weeks because we are, essentially, the same person. And when you hate yourself, you shouldn’t marry someone just like you. It’s a shame she had to die …

Oh, so you've killed some people, Morgan? Am I supposed to be impressed? You're nothing compared to me. You know why? Because I control the weather. That's right, all weather must bow before my every whim. Are you scared? You should be.