Joseph "Jay Dub" Wade, a man who experiences nothing but pure, unmitigated joy in his work as an online film critic, was so excited about seeing Bridesmaids that we just couldn't calm him down. He would bounce agitatedly in his chair, worrying the already-worn armrests, relentlessly asking "When can I watch Bridesmaids?" It was Martin R. "Vargo" Schneider who finally eased his nerves, inspired by a film he had recently seen. In he strode, confident as ever, seating himself beside Joseph. "Hey Joe," he said, "How about a nice refreshing glass of POM Wonderful?" I don't know what film he watched, but it sure did work; that pomegranate juice is fucking delicious.

EXPECTATIONS: Three wedding movies in two weeks? Really? Is Hollywood trying to tell me to stop being an asshole on the internet and get married already? In the interest of not filling this section with questions, I'm not falling for your ruse, Hollywood. Perhaps Bridesmaids will end up being the comedy of the summer, offering an interesting story where so many other comedies this year have tried and failed. Then again, Kristin Wiig co-wrote the script, so it could just as easily be as unfunny as one of her horrible Saturday Night Live bits.

REALITY: The truth, as it turns out, lies somewhere in the middle. Bridesmaids wants to be two things at once. On the one hand, it really, really wants to be the big gross-out comedy of the summer for the ladies in the audience. On the other hand, the film also wants to be a genuine romantic comedy with characters that are actually relatable and a plot that halfway makes sense. Somehow, the movie finds a way to make these two things utterly incompatible.

Bridesmaids stars TV's Kristin Wiig as Annie, an emotionally damaged 30-something whose life only spirals further out of control when she discovers that her best friend Lillian (TV's Maya Rudolph) is getting engaged (to TV's Tim Heidecker). As the maid of honor, Annie attempts to organize the wedding with decidedly disastrous results. After dining in a Brazilian restaurant that looks more like a cockfighting arena, the girls wind up taking a collective dump in an upscale bridal store. Then after completely screwing up a flight to Las Vegas, Annie gets booted out of the Bridesmaids Club. This is where Lillian's rich friend Helen (Rose Byrne) takes over and starts really getting shit done. Along the way, Annie gets a dose of encouragement from butch troll and fellow bridesmaid Megan (TV's Melissa McCarthy) and has a number of encounters with Rhodes, Milwaukee's only Irish police officer (British TV's Chris O'Dowd). 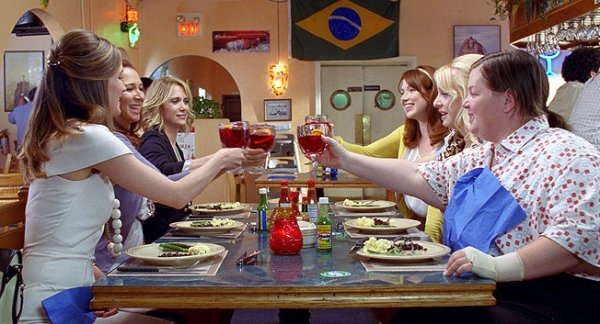 And so the drinking begins...

There's kind of a lot of plot here for what amounts to a romantic comedy with a bunch of fart jokes, but Bridesmaids is able to fit all of this in because the movie is more than two hours long. If I may use everyone's favorite comedy yardstick, that's thirty minutes longer than The Hangover. Most comedies wear out their welcome after ninety minutes. This movie manages to wear out its welcome after about fifteen, but then soldiers onward anyway.

The first hour or so is structured like a Saturday Night Live sketch. The characters establish the scene and the situation, then they make the joke, then they make the joke again repeatedly, for five-to-ten minutes. Then a new scene begins and the whole thing starts over. Depending on how well you can handle Kristin Wiig's brand of comedy (standing around, making awkward noises while flailing her arms), the first half of the movie is either fucking hilarious or utterly devoid of humor. Personally, I'm not a fan. It's painfully obvious which scenes are hers, only this time there are no commercials to break the monotony (I guess you could get up to go to the bathroom).

But then at a certain point, the film shifts gears and puts aside all the awkward humor in favor of building a story with the characters it has established. This second half of the film caught me by surprise, because I had just resigned myself to the fact that I simply wasn't going to enjoy this one. Once Annie announces that she's hit rock bottom (more on this in a bit), her character actually starts going through changes and we're finally introduced to something resembling a plot. Things happen, relationships are strained, conflicts play out. In other words, Bridesmaids starts acting like a real movie. This is the movie I had hoped for, the movie I kind of thought I saw beneath all the trailers, which showed us nothing but wall-to-wall slapstick and sex jokes. 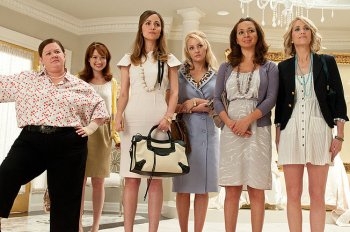 The archetypes are all here: from left right, the fat one, the other one, the famous one, the other three.One big problem with the early part of the movie is that it's hard to care about a character hitting rock bottom when the movie opens and she's already there. Sure, things technically do get worse for Annie over the course of the movie, but the first thing that the movie does is establish her as kind of a miserable person. She's recently had to close down her business; she has horrible British roommates; and her fuck buddy (none other than TV's Jon Hamm) is an utter ass. So right away, we're supposed to feel bad for Annie; then some more terrible stuff happens to her, and we're supposed to feel bad for her again. But because she doesn't get around to confronting any of this stuff until two-thirds of the way in, she's kind of a flat character grasping for depth. They think we won't notice, of course, because they've cleverly hidden Annie's character behind scenes where Megan shits into a sink.

Like I said, though, once all of that nonsense is taken care of, the movie does manage to right itself and go somewhere. This is thanks in no small part to Chris O'Dowd as officer Rhodes. Some know him as "that Irish jackbutt from The IT Crowd," and while he's not exactly the best thing about that show, he's easily the best thing about this movie. O'Dowd gets the laughs when he needs to, but he's also great as the straight man to Wiig's tired shtick. I'd like to see him get more roles like this in the future, but something tells me he's going to be stuck playing Irish Jackbutt in crap like Gulliver's Travels for the foreseeable future.

If you can power through the the obnoxiously unfunny first hour, you'll be rewarded by a surprisingly well-written second hour. Bridesmaids doesn't really succeed at becoming "this year's Hangover," but to be fair, I doubt this year's Hangover sequel will even be this year's Hangover. Someone needs to take a hacksaw to this movie, cut out a bunch of stuff, and rebuild it from scratch. Cut back on some of the more awkward humor and maybe remove a few characters entirely (Annie being roommates with British siblings with no personality adds absolutely nothing), and it would make Bridesmaids considerably better, stronger, faster and ultimately more watchable.

MINORITY REPORTS: While looking at the poster for this movie, I realized that all the quotes came from film blogs like Hitflix and Slashfilm. I want a poster quote, too! Something like: "Bridesmaids is the funniest, sexiest movie this year that I haven't actually seen." - Martin Schneider, Something Awesome. (Take that, Peter Travers!)

Or how about the old stand-by: "The funniest film about white people getting drunk and acting like everything is terrible in spite of their actual life situation since The Hangover." - Ian "ProfessorClumsy" Maddison