There's a chill in the air at the Current Releases office, and it's not coming from the open window in Ian's private bathroom. Also, it's not the icy vapor emanating from Joe's Smurf-frozen heart. It's not even the cool fake TV show our boys have apparently been starring in lately. No, it's our lukewarm reception of August movies! This week, Joseph "Jay Dub" Wade scratches his head at the message of Neill Blomkamp's Elysium; Martin R. "Vargo" Schneider rolls his eyes at We're The Millers; and Sean "Keanu Grieves" Hanson pokes a few holes in the Linda Lovelace biopic Lovelace.

EXPECTATIONS: Neill Blomkamp set the bar incredibly high for himself with District 9, which came out of nowhere to become one of the best sci-fi films in a decade. My hope for his follow-up, Elysium, is that he can find a decent story to match his eye for detail. Elysium ought to at least be visually stunning, though the trailers lean so hard on Matt Damon's robot suit that I worry it's all the film has to offer.

REALITY: Science fiction and political commentary tend to go hand in hand. Even as far back as Metropolis, Fritz Lang used the genre to address class warfare and the dangers of industrialized society. Over time, the genre's trappings have evolved to meet the needs of the political issue of the day. This leads us to Elysium, a film that has just as much to say as Blomkamp's debut (or at least it thinks it does). This time, though, the narrative leaves quite a bit to be desired.

In the year 2154, the gulf between the Haves and the Have-nots has grown wider than ever. While the 99% fends for itself on Earth, which has become an endless urban junkyard, the ultra-rich live in a pristine, disease-free space station named Elysium. When a factory worker named Max (Matt Damon) falls victim to an industrial accident, he's informed by a robot that he has five days to live. Determined to cure himself, Max enlists the help of a gangster friend (Wagner Moura) to get him on the next ship to Elysium, where medical pods can save his life through the magic of hilariously vague movie science. 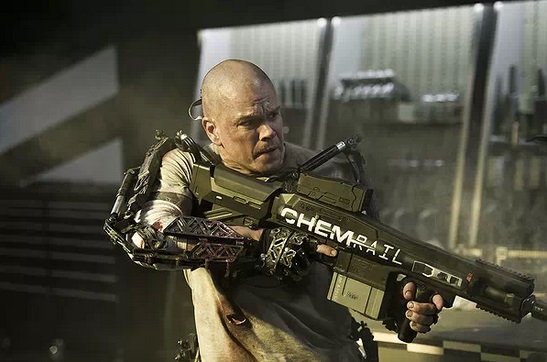 Even in a society based around robots, giant guns still do most of the work.

Equipped with a robotic exoskeleton and quite a bit of heavy artillery, Max hacks into the brain of a wealthy industrialist (William Fichtner) and discovers not only the clearance codes to Elysium but also a secret program that will turn over control of the entire station to Secretary Delacourt (Jodie Foster). It's a race against time as Max ferries his childhood sweetheart (Alice Braga) and her ailing daughter to Elysium, with Delacourt's personal army (led by The A-Team's Sharlto Copley) right on their heels.

In case it's not apparent, this film is insanely front-loaded with plot. All of the pieces are put into place in the first 45 minutes, leaving the remainder to play out as one long chase scene. This is more or less the same structure employed by District 9, but whereas that film spent much of that time developing characters and making us cry for CGI shellfish, Elysium seems content to let Matt Damon's guns do all the talking. (Though all they ever seem to say is "Healthcare Reform" in loud, guttural tones.) 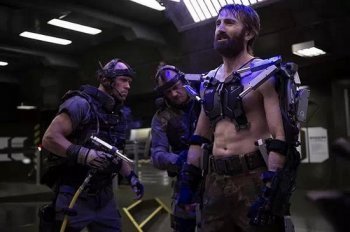 The robot suits represent HMOs.Speaking of which, I hate to keep bringing up District 9, but this film is about healthcare reform in the same way that film was about immigration: vehemently and without subtlety. On Earth, the hospitals are filled to the breaking point, painkillers are thrown about like candy, and everyone seems to have some form of impairment. Meanwhile, the medpods on Elysium can cure any disease in a matter of a few painless seconds. These medpods lie at the center of the film's commentary on healthcare and its view of humanity as a whole.

It's no coincidence that the medpods exist away from Earth in a place called Elysium. In Greek mythology, Elysium was the part of the afterlife meant for the best and brightest of humanity. The people living on the Elysium space station are essentially dead to the world, only traveling to the surface for business. The medpods might as well represent the fire from Mount Olympus, and Max a modern-day Prometheus. His quest for a cure not only threatens the security of Elysium's upper crust, but also it portends a complete societal upheaval.

Sadly, this is about as metaphorical as the film gets. The final fight between Max and Sharlto Copley's Kruger takes place on an industrial catwalk surrounded by cherry blossoms, as both men wail on one another in robotic battle suits. This synthesis of the organic and the mechanical would have been a lovely way to close out the film if the two combatants weren't screaming their personal politics at one another. ("The People!" *BANG* "Private Industry!" *CLONK*) 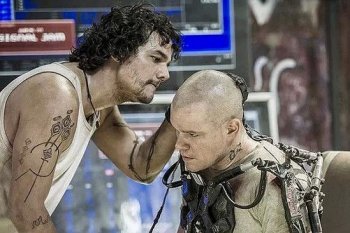 "Tab A into Slot B." God, I hate these IKEA exoskeletons.What Blomkamp's film lacks in insight and nuance, it almost makes up for in visual style. Elysium is an impeccably designed film, wearing its sci-fi influences on its sleeve like a badge of honor. Its shots of outer space evoke (and sometimes blatantly mimic) the sterile look of 2001: A Space Odyssey, while the scenes set on Earth feature all the sweaty grit and urban decay of Soylent Green and other dystopian sci-fi films of the '70s. These stylistic choices, coupled with the landfill design of District 9, make Blomkamp's love of the genre's aesthetics endearingly evident.


Time will tell whether Neill Blomkamp will become one of this generation's great sci-fi auteurs or if he's just a one-trick pony with an oddly specific trick. Compared to the mainstream-action slop we've seen this summer, Elysium is an interesting diversion. If, however, you were hoping this director would grow by leaps and bounds between his first and second film, then you may be in for a sore disappointment. Elysium is decent, but with a better handle on his story, Blomkamp could have made it something great.