Thursday, Apr 07, 2005 by Reid "Frolixo" Paskiewicz
Know of an awful site? Send it to us and become a hero!

Iced Out Gear, submitted by Dr. Detroit. This site has been an awful link in the past, but I’m linking it again because I have an important urban fashion update to share with you all. Since I am a loyal customer of Iced Out Gear, I receive email notices on any of their new products available to the public. But before I get into that email, let me first explain the situation I experienced with my Iced Out Gear pimp cup purchase that I made last Christmas. 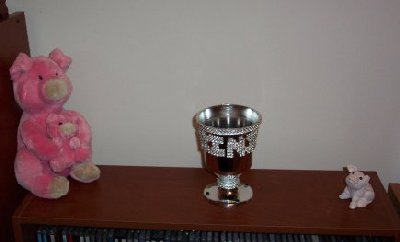 I ordered this extravagant and shiny pimp cup that was made entirely out of chrome plastic and cheap rhinestones for a friend of mine named Rikin, who is one of my best friends that was born in Bombay but acts like he is from Harlem. Anyway they accidently shipped the pimp cup to Illinois instead of Michigan, which I can understand because the words are very similar. Wait no they’re not. After I got on the phone with the customer service representative for Iced Out Gear, I straitened everything out and was told that I would get it in one month, well after Christmas when I was going to give the cup to my friend. When I finally get the pimp cup a month later, I find that they spelled his name in rhinestones incorrectly. Instead of “Rikin”, they spelled out “Rinik”. They failed making a cup with 5 letters! I gave the cup to my friend anyway and he punched me in the nose and that was the last I’ve heard from him. Thanks a bunch Iced Out Gear!

Anyway here is the email I received from Iced Out Gear a few days ago:

What's up yall? Check these suckers out. They called LED Scrolling Text Belt Buckles. These LED Belt Buckles is hottest thing out right now!! Be one of the first people to floss this new LED Belt Buckle. Just imagine yourself in da club with it. Write whatever you want and let it scroll across the screen! Your name , your number, your hood! Stand out in the club without a bottle of bubb. Scroll on playa. You can do the following:
Can store up to 6 different messages
Up to 256 characters per message, THATS ALMOST A FULL PARAGRAPH!!
9 Speed settings
9 Brightness settings
Here is the real deal. Because you are on our mailing list we are going to give you this one-time opportunity to buy the LED's at ridiculous prices. This offer WILL EXPIRE on April 20th 2005. Only while quantities last! In order to get these insane prices, at checkout, enter promotion code: CRAZY PRICE. Holla at you later!"

That’s right G, LED belts to light up yo pants dawg! It has up to 256 characters so you can shout messages to yo peeps from yo belt while you chill. You doan even have to talk, jus point to the belt y’all. I can’t wait until they upgrade this thing to 400 million characters so I can have the novel Moby Dick on my belt. Shit dawg, that’s tight. No really the belt is too tight!

Really can urban accessories get anymore retarded than this? I would love to tell you the answer is no, but the sad truth is that Iced Out Gear has a team of Nazi scientists feverishly working in their labs to design the most diabolical and heinous urban apparel to further the downfall of western civilization so that the 4th Reich may rise from the ashes. I’m really tempted to buy this idiotic thing just so I can wear it and have it scroll the text “this is a belt”. That way everybody that sees it will know that it is a belt and not a biscuit or badger. 80 bucks is a little steep for a joke though so I think I’ll just hold out for the derby with spinnaz, LEDs, rhinestones, and air horns. Holla!