Tuesday, Apr 05, 2005 by Rich "Lowtax" Kyanka (@TwitterHasBannedAllMyAccountsEver)
Know of an awful site? Send it to us and become a hero!

Real-life Truman Show, submitted by The Rageous. Hoooo boy, today's ALoD is a real whopper of a gem. "Chris Roller" looks like your everyday, average Joe with a premature balding problem and questionable fashion sense. But if you look behind this - and it's quite easy to do so on the Internet - you'll discover the fact that ol' Chris here believes he is God, able to take people to heaven, levitate objects, make various celebrities pregnant, and claim he's the second coming of Jesus Christ. Don't believe me? Look yourself! 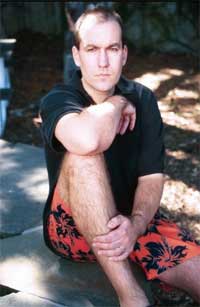 In April of 1999, I had a spiritual experience in which millions of spirits started entering me and are still entering me if I'm spiritually powerful enough to hold them . I do believe that I was able to hold heaven at that moment. It made me extremely powerful spiritually. It led me on a 2.5 month practice journey which taught me how to use my spirituality and the magic associated with it. I have human angels (CIA for example) and spiritual angels. They both protect me. In my journey, the spiritual angels inform me of impending danger, then help me to eliminate the danger using my magic. There have been many attempts on my life during this journey to help prepare me for the future. The experience led me to believe that I am Jesus - the second coming.

Why Katie Couric?...because she interviewed my babes/wives. Wives you ask? Yes, about 20-30 (probably a lot more) wives that are to have my baby, and Celine Dion and Katie are two of them. Why Celine Dion? Ya got me. I guess she likes me. Also, I've been told her baby boy is mine, yet I've never met her - this is a magic baby. Why Katie Couric? She wants to be my wife and have my baby. Say what (Polygamy)? (All My Babes)

I know I keep claiming movies/shows as my own (more), but I believe the X-Files was ignited from an interview I had in trying to become a Naval Nuclear instructor. Either that, or I'm trying to claim Gillian Anderson as my own. Ed TV and Baby Geniuses are also movies that came out in early '99, during my revelation, as indication that these movies might be mine as well. Also, Joe Dirt is like a Forest Gump for peons, sort of the type 3/5/6/7 version of me. Forest Gump would be the type 1/2/4/8 version of me.

In the Game of Life, my spiritual journey has been very similar to a Dungeons and Dragons game, where I gain spirituality and strength as the game goes on. Much of the imagery presented to me in my spiritual journey came from a D&D game on my Intellivision game system played when I was young - also current 3D games like Duke Nukem and Doom. In the real game, I am a spiritual warrior armed with a belt containing the force. On my back is a spiritual tank holding my spirits. The more spirits in my tank, the stronger I am spiritually, and the more I can use the force. The tank was small when I was born, but as I progressed in life, the tank got bigger - I could hold more.

God bless you God, Chris Roller. In this confusing and chaotic game of Dungeons and Dragons we call "life," it's good to know you're here to get Celine Dion pregnant and create "Baby Geniuses" while leading the angels in the CIA to heaven with Duke Nukem. Apparently we're all "actors" in his "Truman Show," playing some mysterious part in his alternate timeline script of love. But the good news is, and I really struggle to call it "good" news, he's got a 15-year old kid (according to Chris, "18 via magic") somewhere, who undoubtedly shares in his godlike powers. Wow, just what we need, more Gods walking around, accusing everybody else of participating in some global conspiracy of unimaginable proportions! I wonder what type of actor I am. I want to be the extra who walks around in the background of an office scene, holding a manila envelope and then raising my hand as if to say, "hey, hold that elevator!"

PS: Apparently Chris Roller is convinced he's running for President of the United States in 2008. His running mate, naturally, is Bill Gates. I'd vote for that ticket. Also did I mention he's suing David Copperfield for $50 million, claiming he "used his godly powers." I don't think there's a court in the world that would throw this whopper out!