Saturday, Apr 02, 2005 by Reid "Frolixo" Paskiewicz
Know of an awful site? Send it to us and become a hero!

Houston Hash House Harriers, submitted by Sydbarrett. Today's awful link is very dear to be and has found a special place in my heart that I usually only reserve for worms and fatty tumors. Forum goon Sydbarrett, who has an uncanny knack for finding the most confusing pictures on the Internet, posted this site much to the horror of onlookers like myself. At first it wasn't so much that the content was offensive, but rather confusing to what the hell was going on in these pictures. WHO ARE THESE PEOPLE? 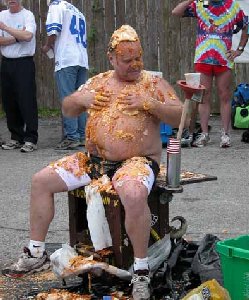 I read a lot on the site and so far as I can tell, this is a group of people that meet online and get together to drink, chase each other in races, and dump food products on each other that looks like some weird sexual fetish. So the Houston Hash House Harriers are some sort of club of ugly and deveint people conducting strange and lewd behavior in area Wal-Mart parking lots, and probably plotting the downfall of the United States Government. I have just reported the Harriers to Homeland Security so they can be taken out like David Koresh's cult in Waco. Think I'm overacting? Well take a gander at this! 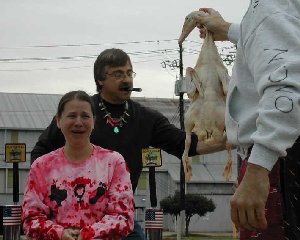 Yeah that's what I thought. You MUST take a look at the 2nd half of these images from "Pooper Bowl XVI - Poultrygiest". Fucking Texas.