Saturday, Feb 11, 2006 by Corin Tucker's Stalker (@DennisFarrell)
Know of an awful site? Send it to us and become a hero!

Oh Wow Adult, submitted by me. The deal is pretty straightforward. Dan the Balloon Man owns a circa-1997 website, and on this website he offers his unique services. For a nominal fee, Dan will come to your party and totally rock the house by twisting balloons until they form elephantitis-stricken cousins of normal inflatable women. Look out Good Times City, here we come! 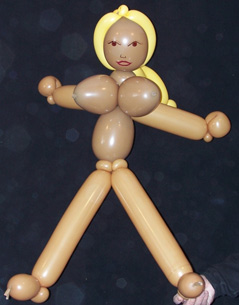 I'm trying to picture what such a party would look like and I just can't do it.

One moment you're quietly huddled around a jukebox that only plays Menudo with a bunch of your fellow drunken jerks, thinking of an excuse to leave even though your birthday party just started half an hour ago. Suddenly some guy named Dan comes in and announces the party is about to get kickin'. He sort of fumbles around in his pockets for some balloons, then takes a few minutes to blow several of them up while everyone drinks in skeptical silence. The sweat builds on his forehead as all eyes in the room burn through his very soul. His fingers hasten as he tries to twist several flesh-colored balloons together, then slip. Dan whispers a solemn curse and tries again. Finally, with a hopeful smile he holds up a balloon animal that vaguely looks like a naked woman whose body has been mangled in a printing press or one of those industrial mixers. One by one, everyone in the room begins to clap in unison. The party has been saved.