The South Art Gallery Of Fine Civil War Art, submitted by Laser Soup. Once you get past the splash page and what could possibly be some of the largest text possible without making a computer burst into flames, you'll find that like a faithful Japanese soldier stranded on an island, a few in the South are still fighting an epic battle in the War on Christmas. The only problem is these folks are genuinely confused and are fighting the wrong battle entirely. They seem to be under the impression that Santa Claus is a Confederate! 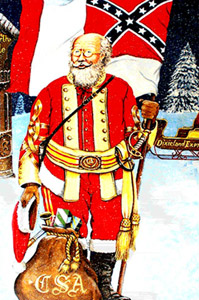 Just look at him, jolly old Saint Nick is as happy as a pea in a pod. And why is he so happy - He's happy, because it's Christmas eve and he's a head'n South Y'all. What true Southerner wouldn't be happy A GO'N BACK HOME TO GOOD OLD DIXIE...

There might be something to this because come to think of it, I've never really seen a Christmas movie where the elves have any kind of appreciable freedom or spending money. Either way, there are plenty of meaningless animated .GIFs for you to enjoy while you get depressed over every slave-built present you ever got over the years. Thanks a ton, Confederate Santa.