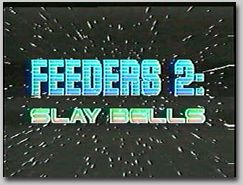 Overview: "Feeders 2" picks up where the original "Feeders" left off (I can't answer exactly where that is) and redefines the word "entertainment". It also redefines "laughingstock", "embarrassment", and "enough raw, concentrated humiliation to cause anybody even remotely affiliated with the movie to commit suicide by asphyxiating themselves with a wad of pantyhose soaked in gasoline."

Directed By: The infamous Mark Polonia, who is undoubtedly also responsible for such contributions to society as the flesh-eating virus and that cyanide spill in Hungary, 1998

The Case For: Once you watch this video, every single event in your life that follows will be infinitely more enjoyable, from family funerals to serving jailtime for manslaughter. It's like going to eat at White Castle on Monday and then dining at Ruth's Chris Steakhouse Tuesday (although drinking from the bubbling puddles behind a rendering plant would probably be better than White Castle).

The Case Against: This movie will redefine your entire existence and make you question the meaning of life. 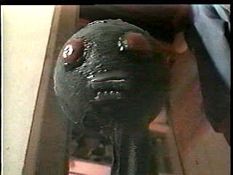 This is one of the "new" aliens. You can tell he is different because he has a softball for a head instead of a condom.

Remember the indescribable joy and wonder you felt as a kid at Christmas time? Do you recall bounding down the stairs, excited as a puppy, to see an assortment of brightly colored gifts under the tree? Now do you remember opening up a present, positively sure that is was a way cool walking Transformer which shot fire out of its groin, and then finding out that it was actually just a box full of burnt twigs, gravel, and pelican feces? Probably not, but this analogy can be best used to describe the feelings that will rush through your body if you don't prepare yourself before renting "Feeders 2". If you repeatedly tell yourself, "It's only a movie, it can't hurt me, it's only a movie, it can't hurt me," you will make it through this film unscarred. However, if you bring back this timebomb of a video thinking that it could be a frightening and thrilling sci-fi film, you're probably going to end up murdering the video store employees who rented this out. The good news is that no jury would ever, ever, ever convict you in a million years.

The good thing about "Feeders 2: Slay Bells" is that you don't need to have seen the original "Feeders" to follow it. Mark Polonia, the homeless vagrant who apparently was the victim of mad scientists attempting to create the first human being that could function solely on brain cell fumes, took the bold step of refusing to connect this film in any way to the previous one. If you remember from my review of the original "Feeders", the world was blown up by UFOs and both main characters died. In "Feeders 2", not only is the world distinctly NOT blown up, but both main characters (and supporting actors that were killed) have risen from their respective graves. Bennet (who was hacked to death with a scythe at the end of "Feeders" and goes by the name "Eric Parker" in this sequel) is back and so is Donna (the woman who was eaten alive by the aliens). They're both married and have a couple geeky kids who are somehow much more convincing actors than them. Bennet / Eric / The Idiot admits he thinks "this will be the best Christmas ever," but it turns he was really wrong, unless last Christmas they all ended up giving each other saltwater enemas. Much like "Feeders", there's a complex and complicated backstory behind this movie. Here's my best shot at describing it: 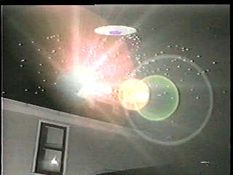 The UFO's attack with the deadly "lens flare plugin"!

Were you able to get all that? If you couldn't comprehend that entire thing, you may want to call up 911 and begin screaming "EXPLAIN TO ME 'FEEDERS 2' BEFORE I BURN DOWN A POLICE STATION." They will dispatch a helpful representative to come over and aid you in deciphering the enigma behind this film, and will probably stop hitting you with their nightstick if you ask nicely. So anyway, it's Christmas, and Jon McBride begins to sum up the basic events behind "Feeders" ("we tried to escape from the aliens but we were too stupid and most of us died") to some mysterious, offcamera entity. The video cuts to a cartoon UFO floating around in space, and then shows the aliens inside, who are made from a mixture paper machete, snot, and magic marker. They don't really do anything but bob up and down, emit one of two sampled sound effects, and push random buttons on oscilloscopes which show a stationary sine wave, but the editor decided to leave in about six straight minutes of this cinematic wonder. Oh yeah, the film is constantly pulsating and inverting the colors, so that just adds to the entire visual treat. Eric looks out the window of his bedroom and sees the UFO beaming aliens down to Earth, and he remarks, "What an odd plane!" Apparently in his world, planes are oval, hover in place, and shoot laser rays at the ground.

Eric wakes up the next day, takes a shower (ugh), and prepares to go to work. His wife stops him in the kitchen and they begin to have what is technically labelled a "conversation", but just appears to be two people shouting lines of dialogue at each other. Here's a nice example:

DONNA (WHO IS POSSIBLY NOT NAMED DONNA BUT I DON'T THINK SHE WAS GIVEN A NAME IN THIS MOVIE): "Hey, what's Santa bringing me for Christmas?" (HER FACE REGISTERS A LOOK OF CONFUSION OR MAYBE EXTREME PAIN)

ERIC: "What do you get the woman who has everything?" (SMILES, SHOWING OFF HIS ARRAY OF BROKEN, ROTTING TEETH)

(BOTH CHARACTERS WALK OFF SET, DIRECTOR TRIES TO USE PROP PHONE TO ORDER MORE HEROIN) 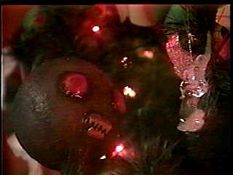 Which is the Christmas ornament? With some aliens it is a mystery.

Eric heads off to work, unaware that the vicious Feeders are in their UFOs, orbiting Earth, and pushing a bunch of buttons / levers that don't do anything. Or maybe they have to go through a complicated and advanced series of actions to simply make their spaceship "fly forward" (which is all it does). The aliens infiltrate some lady's garage, kill her cat by glowing, and then throw some blood on nearby cardboard boxes. They then slaughter the hapless woman, or maybe they just turn her into a prop arm and smear it with fake blood.

Cut to a new scene (oh yay). A priest who we've never seen before is walking around an unknown place, bringing a box of unrevealed junk to the basement of a house in some random location. Cut back to Eric, who is having flashbacks of the night he saw the UFO / plane / 3rd grade drawing (yes, the editing is THAT good). He decides to do a search on "UFOs" by using Infoseek, but his boss interrupts his cosmic joyride by screaming obscenities at him, truly making this "this best Christmas ever." Meanwhile, back at home, Eric's kids fall asleep and are almost attacked by some Feeders, but their dog scares the aliens away by barking. For some reason the dog has a cast on its leg, and I highly suspect that this was because the only way Polonia & crew could get the dog to stay in their movie was by breaking its leg. Even dumb animals can be surprisingly smart sometimes.