Sunday, Jul 01, 2001 by Rich "Lowtax" Kyanka (@TwitterHasBannedAllMyAccountsEver)
Know of an awful site? Send it to us and become a hero!

Jschuur.com, submitted by K-Dog. Joost Schuur, the guy who runs jschuur.com (oddly enough), used to be a coworker of mine back when I was employed by PlanetGamespyPlanet.com.Spy. The only thing I really remembered about the guy was the fact that he smelled like a pair of worn-out tennis shoes that a grown female elephant filled with its own defecation and an exotic collection of rotting foreign seafood. In addition, Fragmaster once called him up on the phone and convinced the guy that he was a representative from Blizzard Entertainment, voicing his extreme displeasure with Gamespy and the company in general. Despite the fact that Frags can only make a single distinct voice, one of a weasel being shoved into a garbage disposal, Joost believed him... even past the point where Frags said he was going to personally hunt him down and murder him. I never really thought much of the guy, at least until I was sent the URL to his webpage, which seems to be a horrible experiment to test the depths of the human threshold for bone-rotting banality tolerance. Get ready for the worst e/n site in the history of e/n sites, folks. 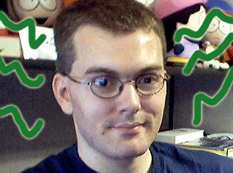 Update: Okay, so it's only 7 socks now, I found one of the missing matching ones.

Friday, June 22, 2001 [1:05 PM] News Flash: This just in... Amazon delivers package full of goodness to Joost Schuur of Irvine, CA. Joost responds: "This is one of the happiest moments of my life"

That's right folks, he publicly displays photos of his SOCKS and AIR CONDITIONER on his FRONT PAGE. I mean, I thought the guy was loopy when I worked with him, but now I stumbled upon his webpage and discovered that he takes photographs of his goddamn socks and household appliances, then proceeds to post them on the Internet where innocent children and helpless elderly can view them and proceed to feel their major internal organs implode. I can safely say that out of the thousands of e/n sites I've been cruelly tricked into visiting, this is absolutely one of the most anally awful gobs of digital pain ever. It's like jabbing a knitting needle into your eye, only without the pleasant side effect of removing it and feeling the warm and calming liquids rush down your cheek.

BUT WAIT! THERE'S MORE! Check out some of the "fun facts" behind our man, Joost Schuur!

I still have a fantasy world which I daydream about sometimes, in which I'm the leader of a genetically superior (but benevolent) strand of humanity, which topples Earth's governments to unite the world's population, rid it of hunger and poverty and promote the expansion of mankind into outer space. My name in this fantasy world is Raven Sinclair and I'm not ashamed to admit this here. I've had variants of this fantasy for as long as I can remember and think it doesn't interfere with my normal life.

The first CD I bought was Eazy-E. I downloaded Debbie Gibson MP3s again after listening to her over 10 years ago and still think her music is cool.

I often have dreams of my teeth falling out.

I once had such a crush on a girl that I followed her all the way to Ireland, where she was going on holiday.

One girl once reported me to the housing commission, claiming I didn't clean enough.

See? He was even a stinky bastard back during his university times. I honestly didn't think too much of the guy when I was working with him, but today I stumbled upon his homepage and... oh boy. Imagine suddenly seeing a photo of the guy who lives in the apartment across from you plastered across the TV during the latest episode of "America's Most Wanted," claiming he's wanted for chopping off dogs' paws and using them to masturbate himself to sleep every night. It's THAT spooky, even without considering the fact that he wants to be named "Raven Sinclair" and lead "generically superior" strands of humanity to topple the Earth's governments. I imagine he'd do it with the sheer power of his stench alone, although that Debbie Gibson music could work as well. Aargh, I'm too freaked out to write any more.