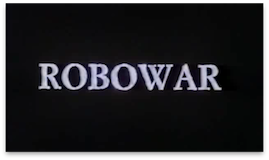 Overview: A group of crack commandos have their indiscriminate jungle shooting spree rudely interrupted by a mysterious cyborg warrior. We would have said "invincible cyborg warrior" but nobody actually tries shooting him so we're not sure about that.

The Case For: The guy who looks sort of like Chuck Norris is full of homespun Southern-fried wisdom, like "It's like collard green stew...if you get caught in it, you never get out, man."

The Case Against: Might trigger a Vietnam flashback, assuming you went to Vietnam one time to watch some leaves rustle quietly.

What would you get if you combined Predator with Robocop? This is quite possibly the dumbest ques- wait, didn't we do this already? Beefcakes, belly shirts, grey market Robocops dicking around in the jungle...yep, we've definitely been here before. In that case, we probably already said something about how the resulting waste of film from such an unholy union should have been thrown into a sewer main instead of being exposed to human beings in exchange for money.

But really, just saying "Predator meets Robocop minus excitement" doesn't even come close to painting an accurate picture of this movie. Robowar is like a handsome stunt surgeon backflip-lancing the grotesque boil of human dignity from the otherwise sleek, rippling backside of the 1980s...wait, no. How about this: Robowar is like a veritable Nicolas Cage, diving through the breakaway glass of moviedom akimbo pistols in hand, one emblazoned with the word Predator, the other with Robocop...no, that doesn't-

Okay, let's try this instead - what do you get when you take the guy who directed Troll 2, the chief beefcake from Space Mutiny and the director of Shocking Dark and dump them all in the jungle with a bunch of film and nothing to lose? Well, for starters, something called Robowar, although it should maybe have been called Verdant Plagiarism Freezetag, or Tri Hard With a Vengeance, or The Bad, the Really Bad, and the Beatboxing Cyborg Burn Victim. And if that trainwrecked dream team of associations hasn't already made you run screaming from your computer, why not enjoy a taste of the mind-meltingly insane DVD cover?

HELLO THIS IS THE GREETING WHERE I AM FROM OH NO WHAT IS HAPPEN TO YOU??Of course, the moment we even mentioned the word "Predator", you already knew the bulk of this movie follows a group of bulging, juiced-up super soldiers schlepping through a generic South American jungle righting wrongs by killing random brown people/endangered species/anything that moves/some things that don't, and comparing their delts in front of really big mirrors and stuff.  You can keep track of our misfit gang of oily Expendables rejects with this handy chart:

"Quang": a.k.a. Tito, the platoon hairdresser and token minority

"Peel": a.k.a. Benjamin "not Carl Weathers, but close enough" McBlackguy

"Papa Doc": a bearded enigma who loves chomping on a perpetually unlit pipe

In case you haven't figured it out yet, Robowar has a little bit of an inferiority complex, which it copes with mainly by making the command squad's official codename BAM, for "Big Ass Motherfuckers" [sic], and by giving them enough fake movie ammo to level half of fake movie Manhattan with machine-gun fire. In case you're not convinced that these guys are incredibly Big-Ass yet, then clearly you need a little taste of the ol' ultra-violence:

If the sign of a great action movie is heart-pounding action and witty one-liners, then Robowar rates about a .01 out of 10, just above that one secret bootleg episode of Veggie Tales in which the broccoli showed up to bible camp with a salad shooter and a crazed look in his eye, but in the end we all learned that Jesus loves us all very much. In spite of what you might be thinking from that video clip, aside from occasional stops to raze every square inch of dirt around them to charred rubble, the BAMs mostly enjoy taking agonizingly long, silent walks through the jungle, accompanied by an assortment of odious synth tracks and some garage rockers who sound like they're slowly working their way up to becoming a really mediocre Guns n' Roses cover band.