ENTER the TEMPLE of ZEX

Thursday, Jan 24, 2002 by Rich "Lowtax" Kyanka (@TwitterHasBannedAllMyAccountsEver)
Know of an awful site? Send it to us and become a hero!

ENTER the TEMPLE of ZEX, submitted by Jack. The webmaster of "The TEMPLE of ZEX" would've just saved himself like eight hours of time if he simply made a HTML document which read "I am retarded, please don't read my site." "Damon Zex" as he likes to be called, or "another shitstain goth fuck" as he probably doesn't like to be called, has erected what I'm sure he thinks is just the absolute most deep and meaningful wad of text since Geocities closed his Chip and Dale Rescue Rangers slash site. 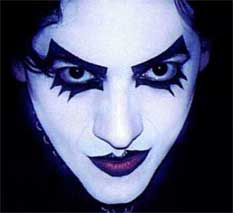 The Zex Temple is a continuum of psychic power which can be used to solve the lofty philosophical quandaries of the ages, aid in the mutation & evolution of the human organism, slay the ignorance perpetuating organized religion, promote absolute psycho-sexual freedom, and eliminate those who dare to threaten creative expression across the planet.

What does the blank faced academician know of astral projection, Karmic balance, precognition, and psychic warfare?

Those fools who merely break away from organized religion and, like a jilted lover, fall into the tentacles of alternative belief systems which deductively utilize the word ''magic'' are pawns in a metaphysical chess game.

So basically, you're stupid if you like organized religion and you're stupid if you don't like organized religion. Damon Zex is the only true genius in this world, and he's too busy traveling on magical astrophysical planes to be bothered with such petty concerns as both typing and making sense at the same time. I'm assuming this higher form of reality has access to a fuckload of generic Photoshop filters, because his little goth gallery of misery looks like it was ripped from a "My First Photoshop" book which also doubles as a drink coaster. Wow, you're so deep because you've got bright red text on a black background! Let's all hurry up and smear chalk on our faces while weeping tears of blood so one day we too can be as intelligent as the Internet goth community! Thank you for simply existing, Damon Zex!

PS: If you really hate somebody, be sure to send them this link.