You are now entering <P> Baron Orlav's Crypt! <P> BE

Wednesday, Feb 13, 2002 by Rich "Lowtax" Kyanka (@TwitterHasBannedAllMyAccountsEver)
Know of an awful site? Send it to us and become a hero!

You are now entering

, submitted by Edward. No, that's not an HTML coding bug on my part, that's the actual title of the page. "Baron Orlav" as he prefers to be called, or "patient #472-A" as the doctors in the psychiatric ward refer to him, is a large, doughy, bloated hick who enjoys dressing up in various embarrassing costumes. The history of the ol' Baron dates all the way back to when he was born in the year 1530, in what I imagine would be the absolute most painful childbirth ever. 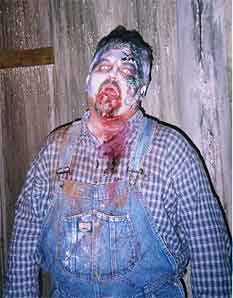 By the time he arrived in Lake City, all three bodies began to reanimate. The men all began to walk again, and attacked morgue officials trying to eat their flesh. One coroner along with Sandford Bailey were killed by the zombies before Delgado and the Police could bring down Plick and White by shooting them in the head. Cletus was rounded up by Doug Wolf and his team of monster wranglers. The attraction manager and his crew spirited Cletus away just before the government could arrive in Lake City and clean up (ie: cover up) the whole mess. All records of the men, their victims, and the meteor have disappeared.

Oh great, the government can cover up killer zombies, dead morgue officials, and disease-ridden meteors, but they can't cover up a stupid Angelfire page? Your tax dollars at work, ladies and gents!