Perchance you've heard of the "Paul is Dead" urban legend, which claims Paul McCartney died and was secretly replaced by a lookalike? Well, the folks over at the Doppelganger and Identity Research Society have done some digging to see just how far down the rabbit hole goes, and it turns out he's "not the only one," as he sang in his famous song "I'm A Believer." 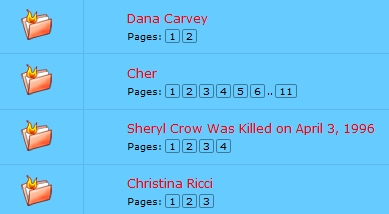 Virtually every star in Tinseltown has been "imposter-replaCIAed" or at least brainwashed at some point, according to the "Celebrity doppelgangers" section. Don't let the fact they're posting on a 1998-era Proboards forum dissuade you, these guys are experts at identifying impostors. Michael Jackson was a victim of mind control and died during a Pepsi commercial. Rosie O'Donnell was "reprogrammed" after saying bad stuff about President Bush. It's probable Ted Koppel's a doppel. They've even gotten their dirty mitts on... Zac Efron? NOOOO !!!

If replacing or reprogramming doesn't work, the Illuminati won't hesitate to assassinate wayward celebrities, or even celebrities who are only tangentially related to the troublesome stars. One of their latest victims, Philip Seymour Hoffman, was apparently murdered by a black ops helicopter just to send fellow Knicks fan Woody Allen a message. Pretty inefficient way of going about things, if you ask me!

As you might expect, the doppelganger system has gotten pretty sophisticated since the days of "Phraunk Finatra" and "Faul" McCartney (they have intensely obnoxious pun names for all suspected doubles). Nowadays, there are four types of "clones," according to some book this guy read:

If you think any of this is silly or complete nonsense, you will be branded a "disinfo artist." Nice try, government stooge! Forum diehards like moderator "beatlies" won't fall for your tricks, even when they're being ruthlessly trolled by Bart Simpson:

The Simpsons has a CIA writing staff, they've been a part of "Operation Mockingbird" since the early 90s and displayed a number of grotesque pre-clues to "9-11" from 1995 onward---see the Operation Mockingbird thread in the politics section of this forum. The Simpsons is fed a steady stream of Harvard Lampoon graduate writers; the Lampoon is a Harvard college recruiting field for the CIA scum.

If you're hoping to join the cause and start identifying some celebrity replacements youself, user "GetSmart" has developed this highly scientific and foolproof method. WARNING: Don't take this process lightly, as your reaction might be "quite violent," with symptoms such as "giving you the creeps," "being frightening" or "a general ill feeling." Make sure you're in a secure setting, maybe with a support system waiting at the ready, before following these steps:

This technique is really quite simple. One looks at a photo presumed to be of the original person, and imagines them near you looking at you, almost talking to you. Then you imagine that they just turned their head, and briskly they turn back to look at you... except this time it is the next picture presumed to be the double.

That's right: Just use your imagination! Assuming you have one and aren't a synthetic robotoid clone yourself, of course.