You might not think there would be a lot of news about a moribund movie franchise from 25 years ago, and you'd be right, but that doesn't stop Bill & Ted's Excellent Online Adventure from updating regularly in 2014, in dogged pursuit of any sequel rumors! Bill & Ted 3 has been the webmasters' white whale since they were shipping out fanzines in the early 90's, and gosh darn it, they're gonna see it through.

Whiile they've miraculously avoided every web design trend of the past two decades, like a long-lost Japanese soldier who doesn't know WWII has ended, the Excellent Online Adventure crew doesn't shun all technological advancements. For example, they've put out five podcast episodes since December. "Probably the question you may be asking is, why a Bill & Ted podcast, and why now?" acknowledges the "webdudess" in the first episode. It turns out there are so many things happening in the Bill & Ted universe right now that it necessitated a podcast, where she can go into "more detail" than on the site.

It is hard to imagine anything more detailed than the site, which features meticulous linguistic notes on how to talk like Bill & Ted (for the last time, it's not valley girl speak, god!!!!), detailed synopses for each episode of the Saturday morning cartoon and the short-lived live-action series, as well as every possible scrap of packaging from Bill & Ted's Excellent Cereal. Stockpiles of useless information like this used to be the domain of fansites until wikis absorbed all the data, but when it comes to Bill & Ted, the wiki just can't compare! 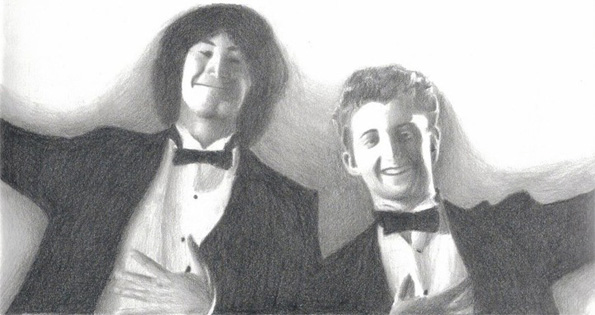 The best/worst part of the site is the massive collection of heinous fan art, which ranges from a super-detailed recreation of the phone booth to some guy standing in front of a Circle K in a Bill & Ted shirt. Come on, dude.

There's also fan fiction, which is a lot less awful than the "Bill & Ted's Excellent Halloween Adventure" stage shows they used to do at Universal Studios until some Vice writer had to go and ruin the fun. Here's a description of the 2000 performance, which is, again, not fan fiction but a real thing that happened in front of an audience of actual paying customers who were "curious to see which famous stars and characters from the past year of movies, television and music will make it into the mix":

Mr. Burns and Smithers try to get Bill & Ted; Shaft, Charlie's Angels, and Wolverine from X-Men come to their rescue. Burns & Smithers escape in the phone booth. Bill & Ted use the cell phone to bring them back; the music from the beginning of Van Halen's "Runnin with the Devil" plays and Janet Reno comes out of the phone booth with a net in her hands. Elian Gonzalez runs out to get away from her and they chase about. Charlie's Angels fight the villain from Scream as Van Halen's "You Really Got Me" plays, then Big Momma goes after Shaft.