Yes We Can Has (Thanks, Gaybraham Lincoln!) 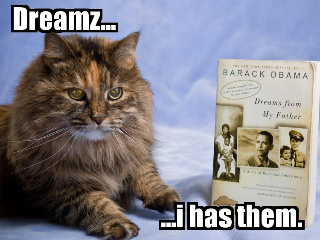 Even when their writers have complete freedom to reference any conceivable topic, lolcats never come out funny. When these madcap image manipulators start applying the kitten-photo-plus-wacky-misspellings formula to specific subjects, such as the endorsement of Barack Obama, the resultant pictures creak from the strain. At Yes We Can Has, the humor value degenerates exponentially as the captions become more specific. Lolcats prove ill-equipped to address hot-button election issues such as multiculturalism, American-Chilean relations and dental disease. At times, the creators' cluelessness can be amusing: Is Obama really courting the plushie vote? But ultimately, the Yes We Can Has site must disillusion sane Obama supporters, who are forced to acknowledge these giggling ninnies as their peers. It also causes anyone who has ever created something on a computer -- basically, everyone but John McCain -- to feel nagging associative guilt about what the Internet has wrought. 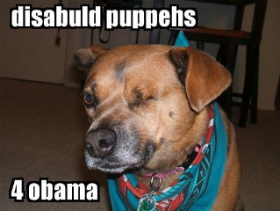 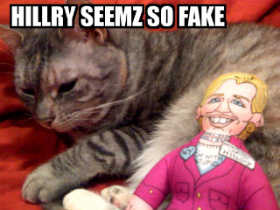