Wednesday, Jul 02, 2008 by Andrew "Garbage Day" Miller
Know of an awful site? Send it to us and become a hero! 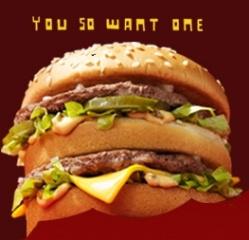 For its latest stunt, McDonalds revamped its product-placement scheme. They're staging an online contest, with participants interpreting the old "two all-beef patties, special sauce, lettuce, cheese, pickles, onions, on a sesame seed bun" jingle. The winner's song appears in a 30-second ad. So, instead of paying artists to mention the Big Mac, McDonalds has persuaded them not only to tout it for free but also to compete for the "privilege" of providing a billion-dollar corporation with a free commercial. A few professional musicians have entered the fray, such as Christina Milian, who ad-lib coos "I want my Mickey Ds!" and takes a weird seductive pause before "sesame seed bun." The full library also includes an obese country singer named Skeeter Crane, a maddening assortment of self-amused emo geeks, an elderly woman accompanied by a jazz guitarist, and some rappers who probably still think they're getting $5 for their efforts. You're all encouraged to record subversive versions that are rich with smuggled content: The company that approved the "I'd Hit It" ad (and is now using the past-expiration slogan "You So Want One") probably isn't up on its Urban Dictionary entries. The submission deadline is July 6.