Men are supposedly hard to shop for. You see all these commercials about kids getting their dads ties and shit for Father's Day, and that apparently gets chalked up to people "not understanding" what men want, rather than kids being kind of clueless when they're asked to buy something for an adult human, because they have no idea what might interest an adult. Because they're children.

Anyway, all that is changing, thanks to the wonder of Man Crates, a new gift company for the 21st century man. And what is the 21st century man into, you may ask? Food, weapons, booze, video games, and sports. That's all a man needs - indeed, it's all he wants! And now you can have all those things shipped to him in a wooden box (crowbar included). Just in time for the holidays! No baskets, no bullshit scrunched-up paper filler*, just wood and stuff to eat/drink/look at/use to kill.

Yeah, about that last part, you really can ship a Man Crate full of weapons. Go ahead, I'm sure it's fun and I'm even more sure it's a great idea. Besides, you're sending it in the mail - you don't necessarily have to be around if something terrible happens. Give the gift of HorrorChristmas! 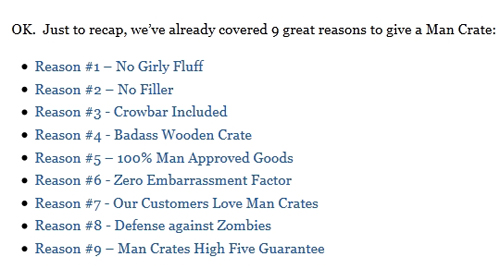 Also, if the "man" in your life likes whiskey, you can send him the Whiskey Lover's crate, which contains soft drinks and pretzels and a flask, but no actual whiskey. I should note that this doesn't mean they can't ship alcohol. The Adam Carolla crates contain alcohol, and they ship those, except to some places. Oh and by the way the alcohol they include in the Carolla crate is called Mangria. I assume it's just sangria with an M, but that's an unverified assumption. I'm not going to Google it.

* It's worth noting that this distinctive lack of "packaging filler" has led to a few broken bottles. As a result, "retro gamer" Coke is now shipped in cans. The precious Mangria remains unaffected.