Are you ready to laugh?

If you answered "no," you're in luck, because there are no laughs to be had here at gonzocartoons!

The first thing you might notice when you visit the site is how it requests your location. I'm sure there are plenty of valid reasons a simple cartoon site would want to know your exact location. Who knows, maybe it'll generate a hilarious comic where the punchline is your city! There's also a QR code, the AOL Keyword of the modern era. Scanning it will reveal a link to the same damn site you were already looking at, a great use of the technology and a genius marketing technique.

Why all this useless crap? Creator Mike Gonzo, who's taken the liberty of trademarking his own fake name, is a mobile marketer who wants to show off his l33t coding chops. Apparently the secrets to successful mobile marketing include throwing useless QR codes everywhere and having an long, unwieldy URL like http://z.ezr1.com/view/page/p/116253/gonzocartoons. I hope you're taking notes.

The cartoons themselves - all nine of them - look like they were scribbled in a hurry by a blind man in a bouncy castle. These primitive stabs at risque humor were clearly thought up by a 12-year-old boy who just saw his first issue of Playboy, or a space alien who has read about jokes on Wikipedia but has yet to experience one. Actually, it must be the alien, because the boy would at least have an idea of what breasts look like. 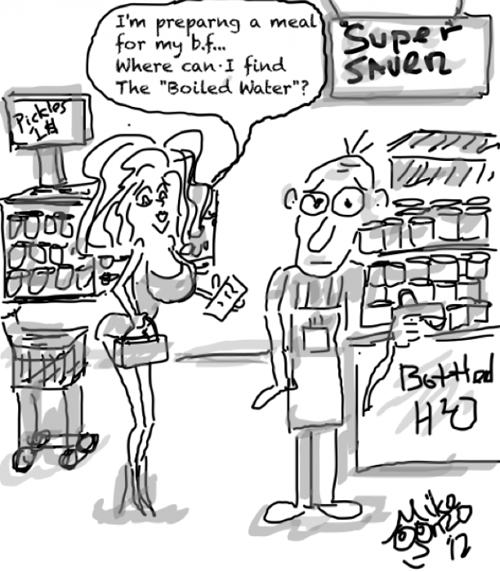 Well, no wonder this sexy mutant with sandbag breasts can't find the water! The whole store is full of vaguely defined pots and cans randomly thrown together in displays mislabled as "Pickles" and "Bottled H2O." I love the grocer's world-weary expression as he realizes he'll have to restock the entire store. 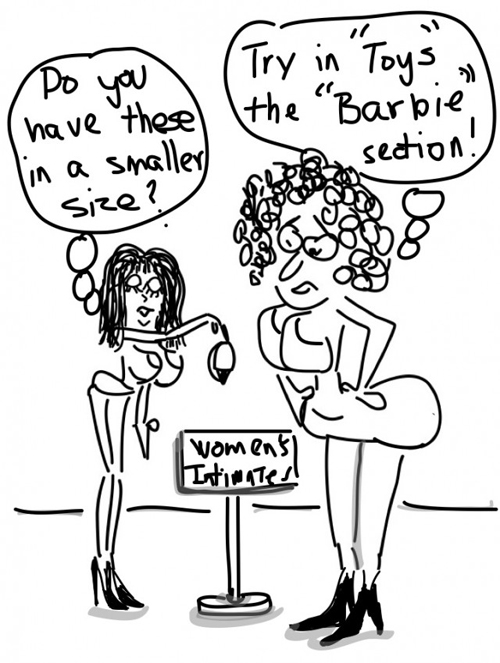 This "Wacko Jacko" lookalike with spiders for eyes always has trouble finding the right lingerie because she was cursed with having one breast being much larger than the other (Mike Gonzo is a master of both anatomy and perspective). The giantess saleswoman with milk jugs shaped like literal milk jugs can certainly sympathize with her plight. In fact, they have formed a special bond that allows them to communicate non-verbally. 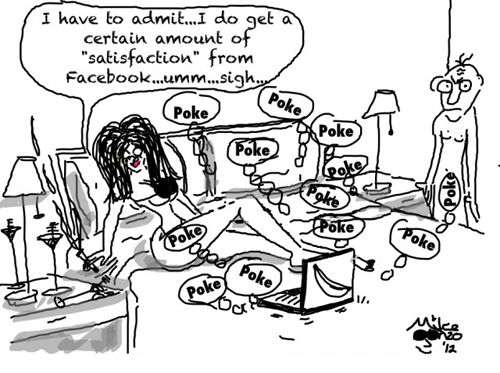 This sultry harlot has put her engineering degree to good use by constructing an invisible dildonic device that grants her physical pleasure from Facebook pokes, a timely subject for a cartoon made in 2012. Her naked lover stares angrily at the viewer, a clear indictment of Facebook's ever-increasing role in the modern surveillance state.

If you inexplicably love these cartoons so much that you want to purchase an 8.5x11 print to display on your wall, you may do so by clicking the gigantic PayPal button helpfully located under each comic. Can't miss it.