Rapture Ready is a message board for posters who believe the Biblical Apocalypse is near at hand. As user $teve points out, the end-time signs just keep piling up:

As you can see reading around these forums, we thoroughly track and cite various current events as signs and indicators that the tribulation period is drawing close and therefore the rapture. I think we are seeing so many signs today that it is incredible, a clear indication of the season we live in, only we don't know how long it will endure. How much longer can this current instability we see around the world socially, economically and geopolitically last before it unravels into major ME / world war, social and economic collapse?

Yet despite the "sea of end-times signs" $teve goes on to cite, some posters seem to blithely regard the Rapture with all the mundanity of a dentist appointment scheduled for next Thursday. Sure, you'll find serious-business topics such as "101 Reasons we are in the End Times!", but in the special ladies section, you'll see lighter subjects such as "Salsa !! Wow !!" Yes, yes, The Rapture will be here soon, as will the seven years of Great Tribulation... but have you seen this new Snickers Cake recipe???

Posters in the joke forum, which is the cool place to hang out, barely even acknowledge the impending End Times. C'mon, you could get called up to the Kingdom of God tomorrow and you're wasting your last hours on this mortal plane making binary jokes and posting "kitteh pics"? Let's get serious, folks.

Things get a little more heated in the politics forum, where posters act like petulant teen girls who are soooo sick of gay people and are, like, totally ready for this Rapture thing to happen already, gawd: 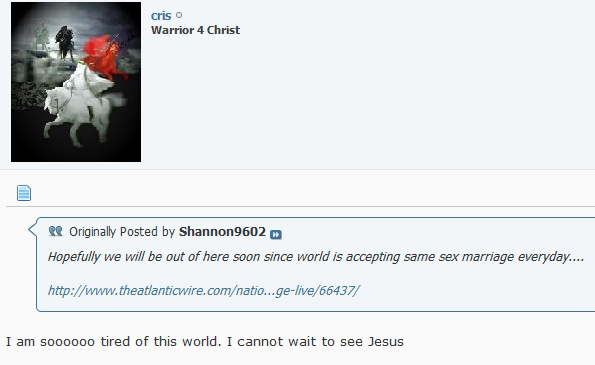 They're clearly getting a little impatient with God's dithering as they await salvation from the depravity of breakfast cereals and major-league sports teams. The assumption seems to be that one of these days the homosexual menace will go one step too far and God will just throw his hands up and say, "Alright, that's enough!" and poof the righteous up to heaven. Obviously, he's waiting to see if Froot Loops adds any sinful new marshmallow shapes before making any decisions.

One regular member posting from the location "Heaven Bound" hopes the Ascension of the Righteous happens sooner rather than later, so all the foolish atheists out there get their comeuppance. Because, really, what's the point of a rapture if you can't lord it over your ideological enemies?