The man behind Musclewomen calls his creation "Fantasy Art of Amazons," but that undersells the craziness this site delivers. His camel-toed she-hulks populate a planet called Shasheer, which came to him during a hypnotic session. They ride pedal-cars called velomobiles, which are "best pedaled nude or nearly so." The two Amazonian races, the Betaqh and the Taqh, engage in activities such as basketball, carrot-eating, raygun-shooting, rickshaw-pulling and organ-playing. (His dumbfoundingly true assertion: "One thing nobody EVER thinks about is how great an Organist an Amazon would make.")

Alarming personal details about the artist occasinally interrupt the verbose sci-fi fantasies, such as when he says he hates dogs with "a dangerously intense passion" and claims to have 'done away with' more than one. Also, his plot about women being genetically engineered to be submissive and sexually insatiable has some creepy fucking overtones. However, he assures prospective female visitors that all sexual assaults depicted are woman-on-man in nature, and he begrudgingly confirms that the characters in "Teen on a Nature Outing" are over 18.

Musclewomen's founder started sketching burly females in crayon more than thirty years ago, and some unseen force, whether inexplicable human encouragement or alien intervention, has perpetuated this hobby. Alas, an equally powerful, real or imagined opposing force, headed by "fundamentalist fascists and 'soccer-mom types,'" has pressured him into riddling his site with disclaimers and prompts for visitors to verify that they're "21 or older, like muscle women expressed through art, and have wings of imagination."

Mr. Musclewomen claims to have used "witch-craft" to "place a productive energy field around my property, computer where this website is edited, and the actual server." "Any attacks on me, whether it is legal or energetic, will result in a degradation of the health of the attacker. The amount of detrimental effect on health will be proportional to the seriousness of the attack." This attack is rather whimsical in nature, so I should get off with a coughing spell or two. 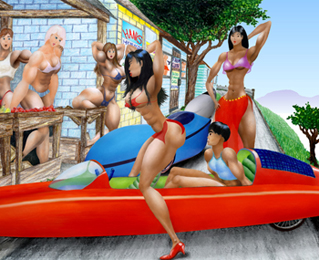 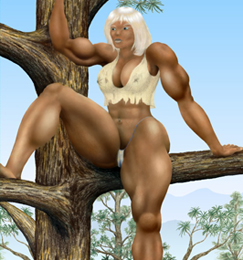