We thought it would be fun this week if we all took in a double feature. Ian "ProfessorClumsy" Maddison had a polarising experience with Thor and Fast Five; Joseph "Jay Dub" Wade wallows in emotional disappointment thanks to Super and Prom; and, finally, Martin R. "Vargo" Schneider indulges himself with Jane Eyre and Win Win.

EXPECTATIONS: Marvel Studios has a proven track record of hiring interesting directors. This doesn't always yield great results -- the Jon Favreau/Iron Man partnership certainly didn't -- but Kenneth Branagh might be their most intriguing choice yet. Best known for his Shakespeare adaptations, Branagh has also found some measure of mainstream success with his wonderful take on Frankenstein and his thoroughly modern remake of Sleuth. If anyone can make a truly artful super-hero movie, surely it's him?

REALITY: Apparently I was wrong: Thor was completely underwhelming. There are shades of Branagh's trademark campiness here, with some good Shakespearean father-son relationships and some very effective comic relief, but it makes for such a disjointed and unsatisfying whole that I can't help but wonder what went wrong. 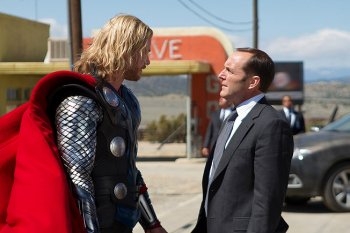 Yeah, whatever... Your suit is silly too!Thor (Chris Hemsworth), the God of thunder, is cast out of the realm of Asgard by his father Odin (Anthony Hopkins) after leading a misguided attack against the Frost Giants (you could say he Thor-ed them out), with whom Odin holds an uneasy peace. Banished to Earth, he meets scientists Jane Foster (Natalie Portman) and Erik Selvig (Stellan Skarsgård) who mistake him for a crazy homeless man. Then Agent Coulson (Clark Gregg) of S.H.I.E.L.D shows up and takes all of Foster's research and equipment and sets up a base camp around a mysterious fallen satellite, which turns out to be Thor's mythical hammer Mjolnir.

All of this silliness came about because Thor was tricked by his conniving brother Loki (Tom Hiddleston) in an effort to prevent the God of Thunder from rising to the throne. Now Loki will do anything to stop Thor from returning to Asgard, because once he gets there he'll surely put the kibosh on Loki's convoluted plan to do some stuff that doesn't entirely make sense, but involves a rainbow bridge and a blue MacGuffin.

Thor feels more like two films bolted haphazardly together; one a mildly amusing, light-hearted fish-out-of-water comedy, the other a serious tale of a powerful man with two sons, set in a realm of antiquity and mythology. Either of these could have been a fairly interesting film in its own right, but thrusting them together like this feels messy and weird. It's a shame that, in an effort to bring these two fundamentally different ideas together, Branagh has relied on visual-effects-heavy set pieces that fail to excite.

Anthony Hopkins, lost in the moment of the scene, starts unleashing real lightning bolts, much to the dismay of his fellow cast members.

Imagine, if you will, a huge battle scene with super-powered Asgardians fighting hordes of Frost Giants (you could say that they're being Thor-ed out); people running on both sides of a flat world; lightning, ice and wind being abused; everyone is flying around and making a lot of noise; and everything I just said is happening all at once. It's an assault on the senses that makes one long for the days of actual stunts and jeopardy that action films used to display. This is a case of visual effects being limited only by the imagination of the artist, and in this case the artist's imagination is bombastic and nonsensical.

Now imagine the opposite. Toward the middle of the film, Thor makes an effort to reclaim his hammer and he must fight off numerous S.H.I.E.L.D agents. Here he is reduced to clambering around in the mud and is only able to win a fight after an extremely impressive burst of physical exertion. I would have loved it if this kind of thing hadn't been restricted to a single scene and had instead become the main focus of the action. Of course, everything soon descends back into visual effects and confusion. 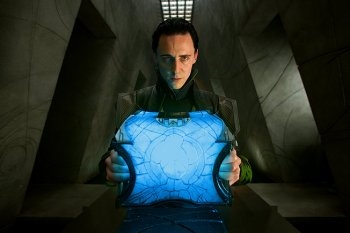 I seriously have no idea what this blue thing does, but they sure seem to think it's important.The cast members generally do their best, though they don't always have an awful lot to work with. Anthony Hopkins and Tom Hiddleston perform plenty of Acting with a capital A in their scenes, but Thor's merry band of uninteresting sidekicks are Shakespearean clowns, spouting puns and poetic silliness. This contrasts awkwardly with Thor's interactions with the Earthrealm scientists, who grin and mug their way through the story, making references to iPods and other such technical wizardry, while Thor demands more coffee by smashing cups on the ground. It's like you're watching Hamlet and The Visitors at the exact same time.

The real stand-out is Chris Hemsworth, previously best known for his work on Australian soap Home and Away (I always preferred Neighbours myself, but we won't hold that against him) and dying at the beginning of Star Trek. Here, he balances the extremes of both stories quite well, while also proving to be a commanding screen presence. He's the only thing that holds the whole film together, except when he's flying around and shooting lightning bolts.

The third act comes upon this film rather abruptly, forcing us into a supposed climax with some easily dispatched Frost Giants (you could say they get Thor-ed out) and a slap fight between a huge, burly man and his weedy little brother. How thrilling! Everything that works in this film only works on an individual level; there is no culmination of elements with which to build a worthwhile cinematic endeavour. This is simply a series of scenes that don't really gel, and that makes Thor ... just a bit rubbish, really.

MINORITY REPORTS: Ladies and Gentlemen, I move that ProfessorClumsy's testimony be rendered inadmissible on the following grounds:
A) This man did wholeheartedly enjoy and recommend both Devil and Skyline.
B) He is a whiny buttface. - Martin R. "Vargo" Schneider