A Taste of Patriarchy (Thanks, dire!)

Who says conservatives can't make food blogs?? Absolutely nobody, but that hasn't stopped the two women behind A Taste Of Patriarchy from acting like they're striking a major blow against "The Left" with every recipe or restaurant review they post! 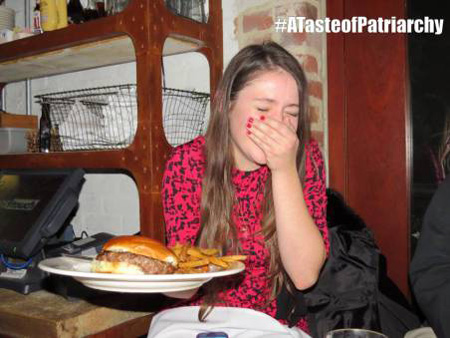 A Taste of Patriarchy's goals are to "further show the link between conservatism, cooking, and baking," and to promote family values and small businesses. Oh, and to reclaim the word "patriarchy." The origin story about the blog's name, which involves a dinner party where one of the founders didn't want to eat a hamburger or something, isn't really very enlightening, but eventually the writers explain that the word "patriarchy" has gotten a bad rap because of "radical feminists":

Now, you might be thinking "patriarchy" is a dirty word. Unfortunately, radical feminists have used this term to push paternalistic government and hatred of men. (Last I checked, I-like so many other women out there-enjoy a great deal of autonomy. Instead, feminists should reevaluate their embrace of paternalistic government because it's hypocritical.) Simply put, they suggest "patriarchy" and subsequent domesticity inherently enslave women and keep us down. (Say what?)

"Say what?" indeed. Don't the feminists realize we solved that whole gender inequality thing back in the '80s with shoulder pads and now everything's cool?

For the most part, A Taste of Patriarchy is a perfectly average food blog, but every so often they make a groanworthy jab at the expense of liberals ("The Left talks a lot about diversity, assuming it only has a stronghold on it"), or pat themselves on the back for smashing stereotypes. "Who says conservatives can't be proponents of such healthy remedies?" they ask. "Who says conservatives can't be for healthy eating, creative cooking, and getting their products from places like Whole Foods?" Yes, who? Who is saying all these things???

Although, sometimes eating healthy is overrated:

Check out these nachos I recently made, because who says conservatives can't be creative and innovative on a budget, with as few ingredients as possible? This is a recipe government-imposed "healthy eating standards" proponents certainly won't like, even though it contains some healthy ingredients.

Take that, imaginary liberals! These conservative chicks are going to blow your mind by eating NACHOS, and they don't freaking care if that fits into your big-government-dictated food pyramid!