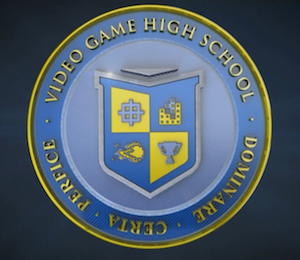 Overview: In the future/alternate universe/sixth circle of hell/Korean Hogwarts, video games are treated like professional sports that for some reason are only played by stupid teenagers.

Directed By: A bunch of "internet celebrities," 2012

The Case For: Games Dean. Also, watching this is a great excuse to smash all of the electronics in your house, kick off your lifelong dream of becoming a grizzled hermit in the Ozarks, or just lay down face-first under an oncoming cement mixer.

The Case Against: Games Dean. Also, if you're one of those people who likes to sincerely self-identify as a "gamer", this movie is not a step towards less people laughing at you in public. 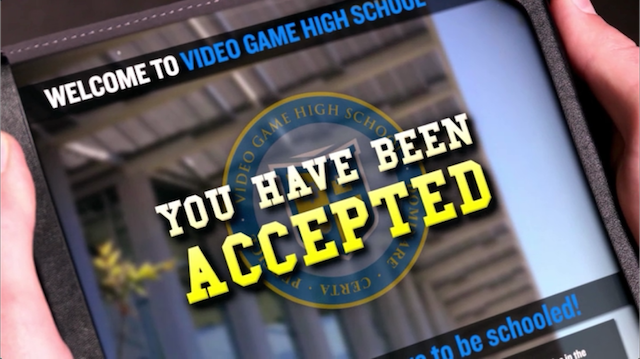 Fresh from the North Korean torture super happiness luck fun chambers*, this week we take a look at a different shade of movie awfulness, stepping into the crazy, topsy-turvy fantasy world of Video Game High School - a wondrous, enchanted high school where twitch is king, the terms "gamer" and "sexual intercourse" aren't mutually exclusive, and teenagers splatter each others' brains all over the walls in socially acceptable ways. It's just like Harry Potter, except without the fake Latin and old gay wizards and snot-eating British children squatting intensely on brooms or whatever it is they do instead of gaming.

Now, a few of you have probably already started penning furious e-mails to us about how it's totally not fair to put VGHS in our bad movie crosshairs because it's technically not even a movie but a "web series" and blah blah blah. And you'd probably have a point, at least right up until the part where the creators repackaged it for sale as a feature-length movie on iTunes for the princely sum of $12.99 (guess which version we're reviewing!). Some of you might even be incredulous that we're taking the time to look at something with admittedly above-average production values when our usual fare makes Ed Wood look like Federico Fuckin' Fellini and - at its very best - falls somewhere between rubber novelty poop and watching old people chew on the artistic/entertainment value scale. So what gives?

Well, VGHS might not be bad in the ways that, say, a Hellgate or a Nukie is bad; there are no magical Nazi rape elves or time traveling robot wizards here, no talking cats!?! or exploding laser turtles or hillbillies in space...but those are only a few of the many strikes against VGHS. Like so many semi-self-conscious internet indie pet projects these days, VGHS seems to operate on the dubious premise that literally anything can be funny - no matter how nauseatingly corny, inane, or unoriginal it might be - as long as you drown it in enough zany non-sequiturs, wacky faces, fake mustaches, and dumbass internet catchphrases. Take this scene, for example:
We're not (completely) heartless monsters here, we'd like to be able to kick back and enjoy the abusive, vein-popping antics of Principal Gunnery Sgt. Roidrage von Zangief as much as the next guys, but nothing sucks the fun out of a room faster than a grown man saying shit like "roflcopters" out loud. Although we do like how there's a convenient "delete future" hotkey for instantly expelling students with extreme prejudice. 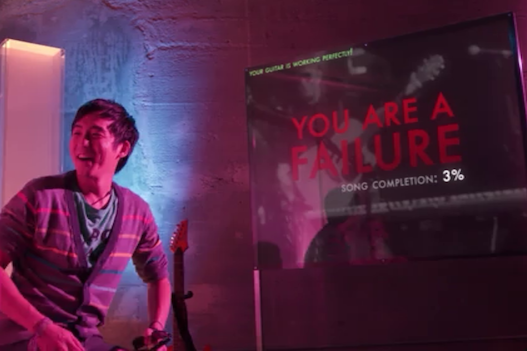 We think the TV is trying to tell him something.So what can you expect from "The #1 funded Film/Video project in Kickstarter history!"? Well, aside from being the world's longest and probably most elaborate Monster energy drink commercial, it's got lots of nifty effects and scenes and nifty effects and even some kind of weird doofy character-ish things that stumble around awkwardly spewing horrible word-garbage and borderline internet memes at each other like so much putrid acid vomit. And nifty effects.

Simply put, Video Game High School is the death knell of modern cinema as we know it. If that sounds a little melodramatic to you, don't blame us - take it up with the creators, whose Season Two Kickstarter page more than a little smugly proclaims "together we are proving that crowd funding can revolutionize the way films are made."

So this is it. Finally. The glorious people's revolution, the righteous wave of trendy internet democratization that will finally bring down the soulless Hollywood studio machine once and for all, delivering us from the cruel, pitiless dark ages of bloated hyper-commercial filmmaking into the heavenly light of user-driven content and crowdsourced creative liberty! The future! The ultimate egalitarian wet dream! Time to reap the benefits of totally independent, fan/crowd-funded movie making, such as:

*Which we were strongly invited to visit voluntarily for spreading vile lies about His Excellency and Highest Incarnation of the Revolutionary Comradely Love Kim Jong-Il, The One True Forever and Dear Leader, Who is a Perfect Incarnation of the Appearance That a Leader Should Have, and also Pulgasari/Galgameth Are the Best Movie Ever Made.