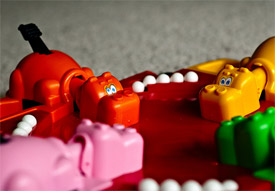 It was Lacan who expanded upon Hegel's begierde; to answer desire we must name it. Unspoken, the hippo remains always hungry, hungry. A shapeless yearning without voice drives the consumption inherent in latter day capitalism. We can be certain that the constant ingestion of spheres is not the actual desire of the hippos or they would become sated. Instead, they are endlessly hungry. For sexual gratification? For a mother's love?

The spheres-as-signifiers, orbs without sustenance, are perfect, globular carbohydrates not so different from the cheese puffs which I previously ingested without ceasing. There is an outlet mall where you can walk in with any container and they will fill it with cheese puffs for ten dollars. I have developed a sealed wheelbarrow which can maintain freshness and I asked several friends to accompany me with these wheelbarrows. I filled an entire auditorium with the cheese puffs, inviting friends and students to take the seats and to listen to my desires as I ate my way to them. My needs were spoken by the act of ingestion, by the crunch of my teeth and the glugging of my stomach.

It was only as cheese dust caked my beard and shirt, only as I soiled my olive colored trousers with sweat, that it became clear I confronted the wrong desires. By answering our desires with falsehood we are no better than the hippos and are as doomed as they to repeat their mistakes. The desire we force upon the hippo is a desire for victory. Not lasting or meaningful. Victory cannot be touched. It can only be clackingly chomped, forever and ever, leaving unfulfilled hunger.