Alvin Greene Is on the Scene! (Not Awful!)

Wednesday, Jul 28, 2010 by Andrew "Garbage Day" Miller
Know of an awful site? Send it to us and become a hero! 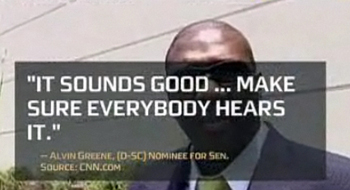 Some of you Awful Link of the Day readers might not read Something Awful's forums. For that matter, you might not keep up with CNN, ABC, or other news networks. So, I'm exercising this section's rarely used "exemption for something awesome" clause to present a parody campaign video for South Carolina senate candidate Alvin Greene, with music created by Satellite High, known on the forums as Serch is BACK! Several outlets initially proclaimed "Alvin Greene Is on the Scene" to be a legitimate Greene-endorsed bid at going viral, a modern-mainstream-media phenomenon on which SA contributor Mobutu Sese Seko comments at his blog Et tu, Mr. Destructo?

The video was available on YouTube, but bad man Ed Frank had it taken down because it contained some of his footage of a Tea Party march. Sticklers who insist on being linked to an awful site every time they visit here can say hi to Ed at Frank Strategies. Everyone else can watch "Alvin Greene Is on the Scene" via this link to Keith Olbermann's Countdown. After that, go listen to more Satellite High and read some more Mobutu; these things are good for you.