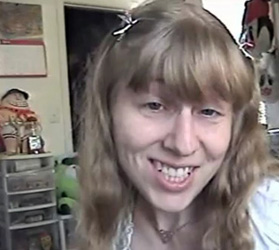 In a dumbfoundingly comprehensive response to a promotional video posted by Monday's Awful Link selection Gloria Tesch, YouTube user "swankivy" spends ten dead-serious minutes presenting a numbered list of problems with a hapless teenager's deluded literary campaign. Which, OK, the Tesch video is ridiculous, if hilarious. ("These books are flying out of here like ... nothing.") But who is swankivy to be throwing stones? Well, apparently the name "swankivy" combines a reference to the Animaniacs soundtrack with a character from a Piers Anthony book. And apparently she's 32, a reasonable midpoint given her ambiguous 16-going-on-60 aesthetic. She has a Web comic, which she celebrated with this tribute. And she made a video called "Stupid!," which boasts honesty as its only virtue.

When not denigrating terrible fantasy novels written by children, swankivy takes things that are actually good and permanently stains your memories of them. For example, I used to enjoy the Bat for Lashes song "Daniel," until I watched swankivy's performance of it, highlighted by a geisha parasol, fairy wings, manually operated wind chimes, and an attempted air of candle-lit seduction that left me feeling as asexual as swankivy herself. She's quite a Renaissance woman, by which I mean she attended RenFaires 2006-2010 and took lots of goofy photos to prove it. If, somehow, all the information presented above doesn't dissuade you not only from clicking on anything swankivy-related but also from being on the Internet at all, you can visit her site for poetry, pentacles, and rants about Disney. 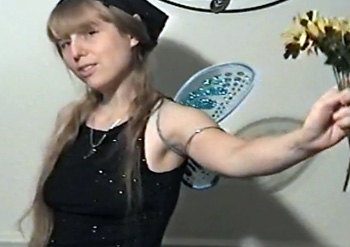