Ice Baby. Submitted by Goats Inc. I don't really know what to say about this other than just telling you what it is. In short, it's a Russian Vanilla Ice imitator. I'm not sure why a Russian guy would choose "imitating a washed-up white rapper who is now a close friend of the Insane Clown Posse" as a career choice. Did he get the job post-collapse? Did he walk into the job assignment office and get told he could best help Mother Russia by dressing up like Vanilla Ice and doing whatever it is he does? These are all questions I can't answer, because I can't read a goddamn thing on his Web site.

Since I couldn't read it, however, I started clicking links all willy nilly. In my travels I found a photo gallery, a tribute page calling Vanilla Ice "The King Of Rap", and even some MP3s and videos. If you have the time I strongly encourage you to check out this link, which will take you to a Russian cover of "Ice Ice Baby" sung by a tonedeaf Ruskie and a black chick who pretty much shouts over him the entire song.

Other than that I really don't know what to say except this is the best thing I've ever seen and forums user "Goats Inc." should be ashamed of himself for submitting it as an ALoD. This is an honest man earning an honest wage by dressing like Vanilla Ice and braving the cold. I could probably learn more about him if I knew Russian, but whatever. Here's a picture instead: 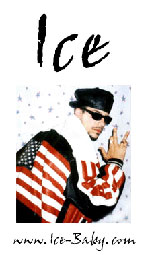