For many of you, this week's biggest release marks a momentous occasion. It is the last-ever Harry Potter film ever to be released ever in the history of ever (until they reboot the franchise in ten years). We sent Joseph "Jay Dub" Wade to find out just how Deathly those Hallows are. In quieter corners of the cinema we have Holy Rollers, which does its best to interest Ian "ProfessorClumsy" Maddison and mostly succeeds. Finally, starved for material, Martin R. "Vargo" Schneider opted to let complete strangers on Facebook decide which film from the Netflix library he should review. Unsurprisingly, they gave him Cool as Ice, also known as That Vanilla Ice Movie.

EXPECTATIONS: This is it. This is the end of Harry Potter. After this film, I don't have to pretend to care about Harry or Dumbledore or anything else in this nonsense franchise. Now, I actually enjoyed Deathly Hallows Part the First, probably more than all the others combined, so I'm really hoping this one can follow through on that film's perfect swing. That's a sports metaphor, kids. Remember sports? Real ones that don't involve flying brooms?

REALITY: When taken as a whole, Harry Potter and the Deathly Hallows perfectly wraps up everything this franchise has been building toward over the past decade. Having spent seven films establishing every single character, showing us every setting and object that could possibly be of any importance and arranging it all on the chess board in the proper order, this film can finally start the game and let the plot conclude itself. All gaming metaphors aside, this is the Harry Potter film I'd been most looking forward to; not because I'm a dick and just want the series to end, but rather because this is the one where, by necessity, the story has to start moving forward.

Clocking in at just over two hours, Deathly Hallows 2 is the shortest film in the series, which is really only because we've long since moved beyond silly things like exposition and character development. Compared to the rest of the series, this film is a lean, tightly paced race to the finish. Most of the relevant plot threads were resolved in Part One, so we're allowed to focus on the final showdown. If you're looking for a slow, plodding explanation of what's happening, then I've got a nearly complete special edition blu-ray collection you might like to buy. 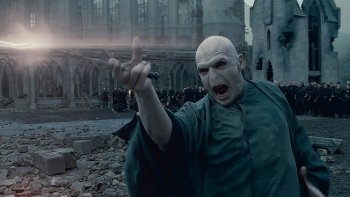 AAAAAAAAAAAARRRRRRRRRRRGGGGGGGHHHHHHCTING!When last we left our intrepid heroes, Harry Potter (Daniel Radcliffe), Ron Weasley (Rupert Grint) and Hermione Granger (Emma Watson) were on a wild adventure, searching for horcruxes and committing truancy. Three horcruxes - pieces of Lord Voldemort's soul - have been destroyed; now the search is on for the final four. After a fun little jaunt in which our heroes break into Helena Bonham Carter's bank vault to steal a cup, they're whisked back to Hogwarts for the final battle. There, Voldemort (Ralph Fiennes) and his army lay siege to the school while Harry runs about trying to figure out what the other horcruxes are and where the hell he's supposed to find them.

I like it when our characters have clearly defined goals, especially when they're surrounded by wizard battles and crumbling buildings and things generally falling apart. It gives us something to focus on among so many special effects. To kill Voldemort, Harry needs to destroy horcruxes; to kill Harry, Voldemort needs to find him first. Everything else is background noise. What makes Deathly Hallows as a whole, and this one in particular, work so well is that for the first time in the series, the story really is only about Harry and Voldemort. Harry accepts his fate, and Ol' Fishface is only too pleased to oblige him. It's great fun watching Radcliffe and Fiennes act off of one another. They've managed to build a palpable sense of hatred and fear between the two characters, and all that emotion is allowed to surface in the climactic battle.

Don't steal his nose, Voldie. How will his iconic glasses stay on?

As for the other characters, each (or at least most of them) gets one last hero/villain moment to round him or her out before the end. We get a wonderful glimpse into Snape's backstory, during which Alan Rickman is finally allowed to play an emotion other than dour sarcasm; elsewhere, Ron's mother gets to evoke Ripley at the end of Aliens, and Neville gets to be the secret hero of the whole movie. These are the moments that count for longtime fans of the series, the payoff to years of being invested in these characters on-screen and/or on the page. I really can't deny it, either. These are great moments, even if I dislike all the narrative legwork we needed to get there.

As always, there are a few missteps along the way. There's a scene between Harry and Dumbledore (Michael Gambon) that seemingly exists only to remind us of similar scenes in the Matrix sequels. Gambon has done wonders with the role of Dumbledore, and having his final scene turn him into The Architect is the last thing the audience needs. Also, for all the death-and-destruction buildup leading up to the final duel between Harry and Voldemort, the ending just seems to peter out. "Here's the duel you've watched twenty hours of movie to see. Okay, now it's done. Let's move along." It's an interesting-enough duel on its own, but they stage it out in the open while no one is watching, and the outcome depends entirely on what everyone else is doing. That's like if Frodo and Gollum wrestled for the ring inside Mt. Doom, but the winner was decided by how many orcs Aragorn could punch in the face before time ran out. This is the one scene in the entire film that doesn't feel properly cut together, almost as though they couldn't agree on which way was more exciting, and then they wound up deciding that less exciting was somehow more exciting. 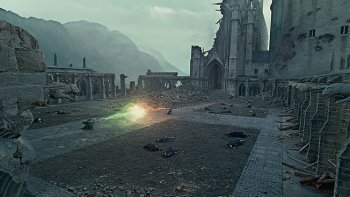 I thought wizard's duels involved transforming into various different animals?Of course, I'm willing to forgive a couple of oddly out-of-place scenes because the rest of the film is so well put-together. Director David Yates maintains the constantly bleak tone from the previous film, yet he still manages to A) take things even darker and B) inject a bit of levity here and there. It makes for a dark end to the story, sure, but it also takes that darkness and makes it incredibly fun to watch. Go on, watch the scene in which Harry and friends battle Draco and his goons in Hogwarts' secret broom closet and tell me it's not exciting as hell.

It's unfathomable to me that it took this series seven tries to make a film that's not only engaging on an emotional level, but also briskly paced with a plot that actually goes somewhere. Somehow, it's that second part that the series managed to keep fucking up. Taken as a whole, Deathly Hallows soars on the strength of its screenplay. There's no thirty-minute tangent where everyone drops what they're doing to go play quidditch; there's no angsty love triangle with no bearing on the mystery at hand; there is only the hero, the villain, and the final battle. In that respect, this is the Harry Potter film I've always been asking for.

Devoted fans might feel the journey is more important than the destination, and that I'm some kind of horrible troll for asking this series to just get the hell on with it already. Maybe they're right. All I know is that after years of empty promises and interminable wheel-spinning, this series finally came through and delivered a satisfying conclusion. Finally, a Harry Potter film feels like a complete, self-contained work rather than an audio-visual set of Cliff's Notes.

MINORITY REPORT: So... what is a Deathly Hallow? - Ian "ProfessorClumsy" Maddison