There is literally nothing about this video that doesn't offend me. It's poorly shot, the volume is WAY TOO FUCKING LOUD, it is as stupid as a shit, and it stars a homely girl who apparently thought fake blood, plastic teeth and laundry maker eyebrows would elevate her feminine appeal. Unfortunately, "elevate" is not the word I'd choose. "Exacerbate" is closer. "Someone" "please" "kill" and "me" would be closer still.

Don't show them any of that. Show them this video. They will immediately understand. This is the exact kind of inane drivel that ruined YouTube in the first damn place. 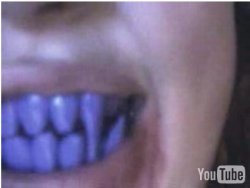 This is the last thing you see before you die.You see, YouTube started out as a pretty great idea: you could watch music videos, live concerts, heck maybe even an illegally uploaded episode of Greg the Bunny; but then something happened. I don't know what that something was, but it seemed that over night Youtube went from a pretty cool website to one with more attention whoring and worthless, self-aggrandizing shit than Live Journal, Myspace and Deviant Art combined.

Maybe I didn't get dropped on my head enough or eat enough lead paint as a child, but I'll never be able to rationalize the mindset of someone who needs attention so damn badly that they will literally do anything for it. YouTube has become a place, where instead of aspiring to a good job, a beautiful significant other and a fancy car, people base their entire lives on how many vlogs they post and many comments and stars they get for uploading videos of themselves doing things that would get them punched in the balls in polite society.

Once upon a time, people this horribly awkward had a place on the social food chain, and that place was called "pariah". Not so today! Today, every fat high school drop out with a web cam, a microphone and an inane opinion can climb their ways to the top of the social ladder -- a position once relegated to people who were actually cool and witty and attractive -- and stay there until they're inevitably knocked back down by someone else who assuredly doesn't deserve the fame or attention. It is an affront to nature.

"uhmm.... Warren Zevon is much hotter"

"She reminds me of Shelly Marsh.
That is messed up, dude."

"hahaha what the hell was that!!?"

That about does it for yet another AwfulVision! I'd like to thank David, Justin, Adam and the rest of you horrible jerks who sent in videos this week. Fuck you, I hate you all. Today is my birthday and watching this shit while faced with the unrelenting march of time is enough to drive a man to drink.

If you'd like to join my ever-growing hit list, be sure to send in a a video. Also, be sure to join our YouTube channel (especially if you don't "get" AwfulVision and think I'm trying to "steal your work" by making fun of your video).

See you jerks next week!