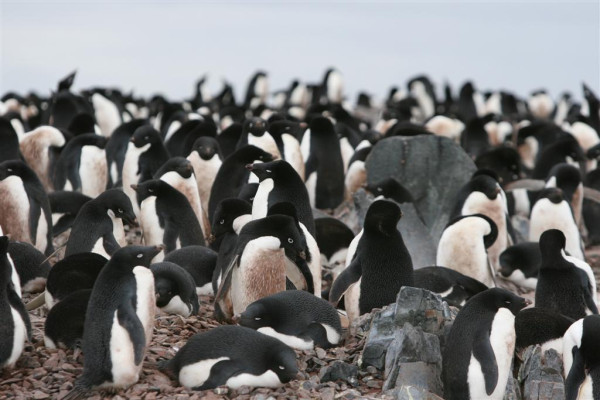 Q: What police or security forces exist, if any? Would you (or the larger bases) have any sort of protection from some stupid Tom Clancy-esque attack? Maybe very lost Somalian pirates?

A: There's no security forces. We have a .22 rifle and a 12ga shotgun on station at Palmer, and I'm betting they must have a couple guns at McMurdo, but they're not for defensive purposes or anything. We have them in case there's a science group down there that needs to kill a larger animal for some sort of research (and the paperwork process to be allowed to do this is MASSIVE).

Q: Let's hear some stories about people "getting toasty". (Russnote: THIS IS NOT A QUESTION)

A: Man, I could write a fucking book on that. Some of the more extreme cases of toast would be hilarious if they weren't so indicative of something really wrong in these people's brains.

"Toast" is at it's core an extreme version of cabin fever. You ever have those times where you all of the sudden realize that you have no clue what you did for the past few hours? Or you leave work to drive home, and then all of the sudden you're home, and you can't remember a damn thing about actually GETTING home?

It's sort of like that, only with days and weeks, sometimes even months at a time. It's easy to be sort of under-stimulated, so you just stop noticing shit. You go through everything by route and routine, completely disconnected from the world. You just end up getting more and more removed from the world, and living deeper and deeper in your own head. People end up walking around in sort of a perpetual daze, like they never really wake up in the morning. Sometimes, someone will be telling a story, and just stop in mid-sentence and stare off into space, having to be snapped back to reality by someone poking them, having completely forgotten the last half-hour or so.

There's a myriad of other stories like that, people completely disconnecting. People walking into the wrong bedroom, undressing and going to sleep in it, not noticing that it's not actually their room. People going to the galley, eating lunch, but if you grabbed them walking out and ask them what they just ate, they'd not be able to tell you, if they could recall eating at all. Someone here related a personal experience to me of simply not being able to remember anything he'd done for days at a time when he was wintering at Pole.

Toastieness can get worse, though. There's stories of people randomly crying, sometimes mid-sentence, for no particular reason at all. There's plenty of stories of people walking into the galley, getting a plate of food, sitting down alone at a table...and just sitting there for half an hour quietly crying, not touching their food. When lunch is over, they get up, take their untouched plate of food to the garbage, and go back to work.

It can also give people a very quick temper. A fair number of the emergency medevacs from McMurdo and Pole over are injuries due to fights; our current doctor here on station has worked a while at Pole, and had a number of broken jaws, hands, and a lot of other fight-related injuries. There's more stories then I could remember of people completely flying off the handle for the most comically minor of reasons, like the cook putting too much cheese in the lasagna or something.

Pole gets the worst conditions of Toast, due to the remoteness and harshness of the environment. There's a few people who've tried to leave Pole in the middle of winter. Keep in mind that South Pole is 750 miles away from ANYTHING, across the most barren, inhospitable, windiest, desolate and bleak landscape on the planet. And that it's usually -80F during the winter.

A few years ago, one guy decided that he had to leave Pole, and tried to ski to McMurdo with nothing but a tent and some Hersheys bars. He made it 11 miles before people realized he was missing. Pole is completely flat for 500 miles in all directions, so all they had to do was go up onto the roof and look, and say "Oh, over there". He'd set up his tent to take a nap in, they went out on snowmobiles and brought him back to station.

One guy did try to leave on a snowmobile. He strapped a couple jerry cans to the back, and just left. He didn't dress properly, though, and kept getting cold, so he had to stop every so often to warm his hands back up, that was how they were able to catch up to him and bring him back.

This other guy decided that he was leaving, and was going to walk home. He cleaned out his room, packed his bags, said goodbye to everyone...and went to the gym, got on the treadmill with his bags sitting on the floor next to him, and started walking. It took the doctors like three hours to talk him down.

During one particularly long winter at Pole, some guys shaved another guy's head while he was passed out drunk. The guy didn't notice that he had no hair for three days.

To be fair, there's the fact that most of the people who want to live and work in Antarctica are a bit crazy to being with.

Q: What kind of hobbies did you have?

A: We had a good home theater setup, 112" projection screen with a 720p projector. We had a PS2 and a Nintendo Wii, and about 2500 DVDs. Every month, we get $300 in a "recreation budget" that we could spend on shit for the station, usually books and movies and music from Amazon or iTunes.

We also have a good collection of skis, snowshoes, and other outdoor gear that you could use if you wanted to go for a hike, or ski up on the glacier.

We also had a well-equipped darkroom with a big supply of chemicals, so people did a lot of photography. The plumber that was there made a camera out of a shoebox, and took pictures of things with it. Came out pretty well.

There was a "Rec aisle" in the warehouse that had all sorts of arts-n-craft shit, paints and tye-dye and henna and fabric and so on, and everyone could use the carpentry shop whenever they wanted, so a lot of people would build various things for fun.

Q: Also, what are the meals like? Do you get an infinite amount of snacks or do you have to purchase them?

A: One of our cooks ran a bakery in her previous life, her specialty was as a pastry chef. And while her other food is really good, her baked goods and deserts were a force to be reckoned with.

During the day there's batches of fresh cookies coming out of the oven like clockwork, and her breads are to die for. People looked forward to Indian food nights almost just for the naan.

But for dinner, she'd pull out her big guns. 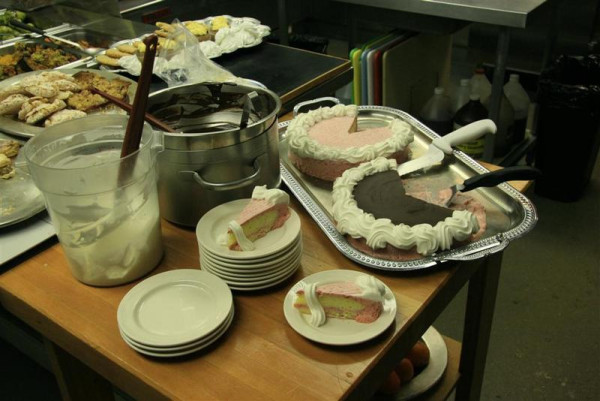 The theory was that her end-of-contract bonus was based on the cumulative weight gain of the station population.

The worst part is that she was turning out this amazing stuff EVERY SINGLE DAY. These sort of things aren't like a special Saturday thing, they're constant. There's no getting away from them.

Every night at dinner, without fail, there was some sort of calorie-laden desert of awesome...awesomeness that's full of awesome. It's all made from scratch. All of it. From-scratch whipped cream and hot fudge sauce are what's in that picture above.

And it's all FREE! There would be these deserts that you'd see at a bakery or something for some painfully high price, and you probably end up forking over lots of money for them because you KNOW it'll be so good, but the cost sort of helps keep your consumption in check. But not there. Have as much as you want, whenever you want.

And there are ALWAYS cookies ready for the taking.