The Last Days Of Capitalism

"O THE PAIN: GOPers WRESTLE WITH OBAMA WIN
By Oligopsony:

NEW YORK - The Grand Old Party is over for New York's young Republicans, who spent last night crying in their vintage cognac as they mourned the end of the Bush era and quaked in fear over the prospect of an Obama presidency.

"I have no idea what's to come," said Amy Noakes, 26, as she and about 100 other conservatives commiserated at Ice Bar in Murray Hill. "It's going to be more like socialism than capitalism."

Noakes and her fellow GOPers talked of a political apocalypse at the penultimate New York Young Republican's Club meeting to be held before Barack Obama's inauguration on Jan. 20.

"I'm trying to savor the last days of capitalism," said Cathy Reno, 23, as she bitterly sipped a three-olive martini. "I fear Obama's inexperience, and that we have no idea what his worldview is."

"I'm buying as many guns as possible, and I'm enjoying the last days of national security while I can."

Others worried about the fate of their money in the hands of a man they see as the lowest of the low - a tax-and-spend liberal.

"I'm divesting all equity before the capital-gains tax goes up," said Jeff Miller, 25.

"I fear a repeat of the bad tax effects of the New Deal and a gross overreaction to the current economic issues," he said. "I fear overinflating wages and prices. It would lead to a huge unemployment boom."

Some tried to keep a stiff upper lip, claiming that they really didn't care that their candidate lost and that eight years of Republican rule was coming to an end. 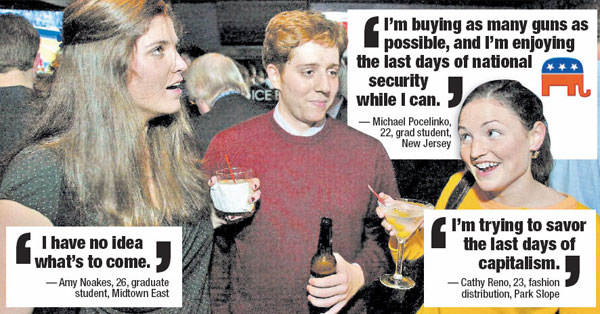 JAPAN: IT EXISTS
By Airza

ORLANDO & OSAKA - A lot of things have changed in her life: The Great Depression. Pepsi. The number of people alive on the earth. But, she says, none of them were like this.

"Many Pepsis were different before." says Kay Williams, a 91 year old. "A billion people since I was born have lived and died."

Williams is part of the growing trend of senior citizens who, paralyzed by a changing world, have withdrawn under the furniture in their house. Williams looks at the floor and refuses to acknowledge my presence. Perhaps to her I was born too late.

"A black president is a surprising thing. I was surprised too when we unleased fire on many yellow people living on an Island. They tell you that Japan is a country and I have never seen it."

And yet Japan is a country. Barack Obama is perhaps a president a week from now, but there is nobody to care about this here in Japan. "There are many presidents from before and there will be many after." says Yamashita Maeda, housewife. "He will like some countries and dislike others."

And Maeda is right. No matter the president we will all live and we will all die. Socialism, radicalism, or even a depressingly moderate agenda it will still be fun to race through high grass and to kill ants.

LOS ANGELES - Things have come alive. Each time we make our toast or open our refrigerator we get an inkling of the incredible feeling of having one purpose in life and fulfilling it. Our president grapples with this obscenity, coupling the joy of satisfying another with the unshakable feeling that he is somehow violating FCC regulations. The microphone whines high pitched, and its feedback eventually reaches a crescendo of ecstasy. Many humans look upon this with derision, but it is sour grapes. Sour grapes feel wonderful, on the other hand.

PROVO - Little Dakota wouldn't eat her bananas. "Mommy, why are we having only bananas for dinner? I want macaroni!"

"But mommy, they taste funny!"

Dakota's mother raised the nozzle of the atrazine cannister and blasted the dinner table with a deluge of industrial herbicide.

"Ha ha ha." Dakota's mother forced a laugh, but inside she despaired. That awful man was going to ban it all. Every trade agreement. Every non-organic food. No fruit but wormy apples for a thousand years. A tear mingled with the slick of atrazine on her cheek; these might be the last bananas Dakota ever tasted.

CAN THE MILITARY COPE WITH A LEADER WHO REPRESENTS ITS MEMBERS?
By Crion


AP - A recent joint study by the University of Maryland and the Center for Policy Awareness shows an uptick in support among enlisted personnel for Democrats and, in particular, President-elect Barack Obama. Dr. Michael Kasper of the University of Maryland's School of Health and Behavioral Sciences points to the racial demographics of the Army and especially the Marine Corps outside of the officer grades as a reason for the change. An Army private who asked that his name not be used in this article disagrees, and theorizes that the shift has to do with war-weariness among the rank and file of America's military. Every night he dreams of leaning against the wall and looking down at the ground, and seeing the brown and the red and the sand and the dead little boy -- red and brown -- in the sand and he will not turn around for he fears a dead little girl has written the boy's name in the brick. Above, the stars are strange and wonderful. The wind carries static and bad disco. Nearby something burns.

REUTERS - Reports emerged that Obama was presented with a kitten in cupped hands. Obama smiled at the kitten, charming those nearby with the tenderness and good-naturedness of the scene. Obama put forward one finger, and slowly stroked the head of the kitten, starting at the point between the ears and ending at the back of the kitten's neck. Despite Obama's show of affection towards a being he had never met before, the kitten was unresponsive. the kitten did not know of Obama's great fame, and was silently consumed by anxieties concerning the fragility of life and the inevitability of life's end.