The only way to make people like you is to act like you are better than them. That's why in recent years, workplaces all around the world have been hit by a lethal injection of management-speak. Don't understand what you're talking about? Call it a "paradigm shift". Want to sell a new product but don't know how to make it sound more impressive? Claim that it "pushes the envelope". Want to win the heart of the cute blonde who works on reception? Then you are a fool my friend, because some guy on the 4th floor that drives a European sports car got her number last Friday. Let's all have a team meeting with the enthusiastic go-getters known as the forum goons to find out what really peels their onions. 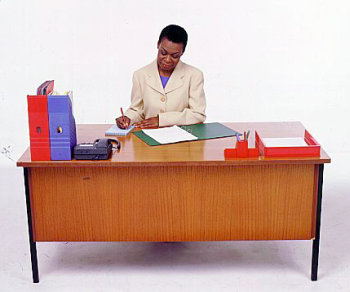 Nowadays, if you work in a corporate office type environment, you probably hear a lot of people (managers especially) throwing around really goofy words, either to sound eloquent, or because certain terms are just too 20th century or something. These buzzwords are like little linguistic tumors that can metastasize and consume an entire company.

At my company, you don't "use" something. You "leverage" it. "What program do you leverage to make PDFs?" "I'd really like to leverage you for this upcoming project." It's seriously that bad now. I first noticed this 4 years ago when I was proofreading something and I was so dumbfounded by it that I asked the guy who wrote the ad if leverage could actually be a verb. Apparently it can.

If you're dealing with someone outside the company, a vendor or whatever, you don't "request," "ask for," or "order" something. You "requisition" it.

We're not supposed to refer to the people who buy our software as "customers" or "clients," and even "users" is on shaky ground unless you're talking about it in the context of tech support. These people who buy our stuff are officially known as "business partners." Don't get the impression that you're just paying us money for a program, we're "partners" now!

"Employee" is also a no-no word. Someone who works for the company is a "colleague," not a goddamn scum-sucking bottom-feeding employee.

We have really dumb names for certain jobs. We have a bunch of temps who do "lead processing" (fancy term for data entry). But we can't call them "Data Entry" or even "Lead Processors." They're "Task Innovators," whatever the fuck that's supposed to mean.

Someone in a one-on-one meeting with me actually used the phrase, "We have to line up our ducks," and I could only goggle at the straight-faced usage of such an empty office colloquialism. I told this to my brother and he gave me three rubber duckies for my birthday. They now sit, single file, on my cubical wall, and give the phrase at least a little, literal, credence.

Working in marketing/advertising gets pretty bad with this. The worst is that people will still say "Think outside the box" seriously but preface it with a cliche warning or a chuckle.

The design world is falling to this onslaught of ridiculous words as well. My current design professor informed us that the new thing to do is "to concept," as in "My fellow designers and I were concepting all last night." When we do in class busywork, she tells us that "everybody needs to be concepting right now." She's a solid teacher, but hearing her verb 'concept' is pretty amusing and irritating at the same time.

At my job, management insists that no one ever quits or gets fired, ex-co-workers simply "choose to seek outside employment opportunities." It's more of an inside joke than a directive. Although when someone leaves, they generally refuse to specify whether it was by choice or not.

FUCK THAT WORD. Seriously, it's a very generic term used in place of several other words and phrases that are more specific to the situation.

"You have to work proactively" is a different definition than "We have to be proactive on this project" which is completely different than "We need to watch out and be proactive about this problem".

Another one I hate is "Going forward" or "Moving forward". I just hate how it's a motion-laced phrase for "In the future". As in, "Moving forward, we need to buy double the coffee than we have now".

Not really a buzzword, but I hear "We don't have to re-invent the wheel" like literally 6 times a day. Come up with a better analogy or just drop it entirely.