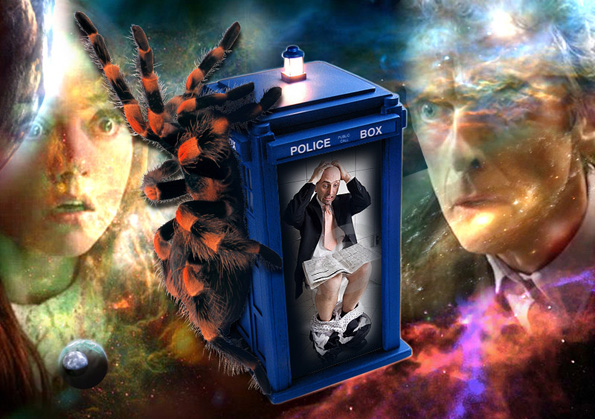 Itsy Bitsy: In present day (2013) London, a man is taking a poo in a public stall. He's reading a newspaper with the headline "London Mayor inaugurates new sewer system." The man is startled by a rubber spider with a goofy face. A couple of snickering hoodlums is dangling it over the top of the door. He shoos them away by shouting "Oi, you kids!"

A few minutes later, the man is disturbed by a creepy scraping sound. He think it's the kids again and goes "Oi!" But it turns out to be a giant spider that rips the stall door off its hinges and devours the man! The rest of the episode is The Doctor and Clara bumbling around while the death toll mounts, along with numerous cuts to children creepily chanting the nursery rhyme "The Itsy Bitsy Spider."

In the last five minutes of the episode, The Doctor realizes that a creature that big could only get around without being seen by using London's newly expanded sewer system. He flushes the spider out of the sewers by opening a big valve, quipping "down came the rain and washed the spider out." Once in sunlight, the spider burns to cinders for no apparent reason except that it's peripherally related to the nursery line "out came the sun." Six people are dead.

Jesters of Fate: The Doctor and Clara arrive in present-day London but are disturbed to find that everyone is acting strangely. Everyone is going about their daily business ... but with a circusy twist! A stuffy woman in a suit conducts a business call on her cell phone while riding a unicycle, and a man absentmindedly juggles clubs while waiting for the bus. When questioned, nobody acknowledges the odd behavior; instead, they treat The Doctor and Clara as annoyances. If prevented from acting out their quirks, the citizens quickly become violent. The situation moves from perplexing to alarming when several people burn to death in a fire because the firefighters behave in a Keystone Cops manner and try to put the fire out with seltzer bottles.

Clara notices they are being watched by creepy silent figures dressed as jesters. When the Doctor confronts them, the jesters pantomime attacking him... but the attacks feel real! He gives chase but is stopped by an invisible wall. Also, Clara is becoming more clownlike as the evil jesters' powers begin to affect her. At first she sheds the comedy accoutrements easily, but they keep coming back stronger and her sanity starts to slip. The Doctor urges her to "fight it, stay with me!" but eventually she succumbs, squirting him in the face with a comedy flower that has sprouted directly from the skin of her chest. Her last lucid words are "Sorry, Doc. If you can't beat them, join them." The Doctor realizes that Clara has hit upon the solution, and challenges the jesters with his own pantomime, defeating them. 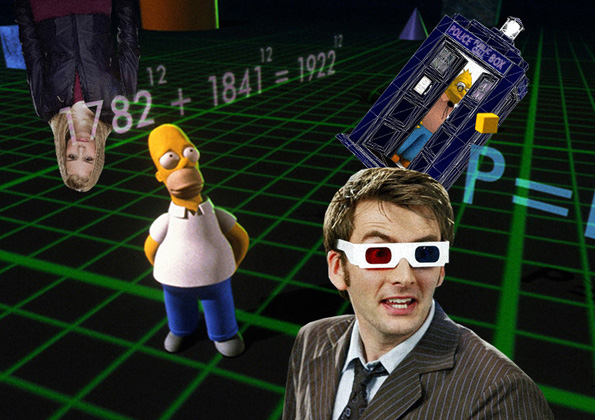 Doctor Simpsons: David Tennant voices the 10th Doctor who makes an unscheduled stop... in Springfield!? *record scratch.* Homer and the other Simpsons are awakened early one morning by a strange whooshing sound. They look out their window and are shocked to discover a famous blue box parked on their front lawn. "Hey, buddy, you can't park here!" remarks Homer. In the few moments that Tennant spends remonstrating with the Simpson patriarch, we see that Grandpa Simpson has mistaken the TARDIS for a port-o-potty with the implication he has defecated somewhere inside ha ha!

The Doctor takes Homer for a brief psychedelic adventure through time and space. Meanwhile Rose Tyler (guest star Billie Piper) stays behind to bond with the rest of the family. The cast comes back together in the third act to investigate strange goings-on at the Nuclear Power Plant, where Mister Burns is getting along famously with the Daleks; together, they hatch a plan to conquer Springfield! The curmudgeonly tyrant and the aliens are bested by the combined tomfoolery of Homer and The Doctor. The Doctor and the Simpsons part on good terms, but the encounter leaves Homer wondering "Wait, Doctor who?"

Thanks to Palpek for the images, and to Applewhite for the blurbs, and to these SA Goons for inspiring some of the episode ideas with their title suggestions: FordPRefectLL ("The Last Golden Graham"); Top City Homo ("Cars on Mars"); and Morn ("Jesters of Fate"). Merry Christmas, all!