Am I right in thinking Egypt is called "Khem" in its own language?


Yes. The Egyptians called their land "Khemet," which means "The Black Land." This refers to the flooding of the Nile valley every inundation season, turning the land dark and making it harvestable. Here's what Khemet looks like:

Also, the land is referred to as "Ta-wee," which means, "The Two Lands." This refers not to the east and west banks of the Nile, as some think, but to Upper and Lower Egypt. Upper Egypt is generally everything that is south of Cairo on through the first caratact, and Lower Egypt is the Nile delta, which is actually a huge area. The rulers who successfully united both of these two lands during their reigns are depicted wearing the dual crown of Egypt, like so: 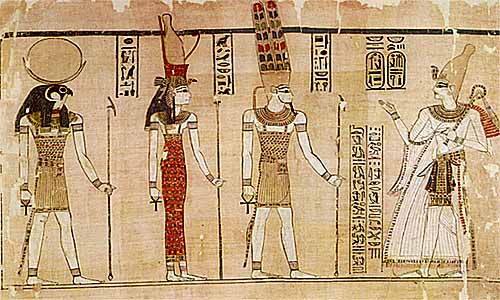 Here, we see the goddess Maat, who is the personification of order and justice, wearing the White Crown of Upper Egypt and the Red Crown of Lower Egypt. She's second from the left. One of the main jobs of the king was to preserve maat (order, justice, etc.) in the land during his or her reign.


"My name is Osiris and I do not have a penis"


A Nation of Laws

Literally, it reads, "It is Osiris that is my name and I have no penis of mine."

The sky is falling!

This one is among the most literal of the translations I've done. It reads exactly "The sky is falling."

Please make "I've got a lovely bunch of coconuts". If there is no hieroglyph for coconut, please replace it with mummy or crocodile or something awesome like that.


A Nation of Laws

I can't find the glyph for coconut, but this says, "I have a lovely bunch of sycamore figs."

"There are centipedes in your vagina"

All your base are belong to us!

I should clarify that I substituted the word pyramid for base, which I think is cooler anyway.)

I think this definitely qualifies as using a power for evil.

I forget who requested this too: "It puts the lotion in the basket."

my name is ozymandias, king of kings

Here's my interpretation of this one. Ozymandias is the Greek name for Ramesses II, so I've used the prenomen of his royal titulary in this translation.

Also, lots of people requested "your poison womb is making heaven too crowded," so here it is:

I give you my translation. This took me ages!

Lots of people also requested "do you have stairs in your house?"

This translation is actually very close to the English version of the question, so I'm proud of it.

I have a big sheet of paper where I have foreign people write "welcome" in their language, so that everyone knows they're welcome at my place (ain't that the corniest thing?). I'd love it if you could translate "welcome" in hieroglyphs, I'd print it out and add it to the sheet, in case a mummy resuscitates and comes in for some grub.

Here's the word for "Welcome!" I don't think your paper is corny; I think it's cool. :)

I couldn't find the word for raisin, so I used grapes instead. This reads, "I require no grapes."