Slogans That Shouldn't Be

In this modern world full of Vlogs, Wiis and P'zones, every single product, service, organization, album and movie is required to have a tagline that differentiates it from its rivals. This has lead to a culture where the ultimate goal is to be able to Broadcast Yourself while trying to Think Outside The Bun. It's getting out of control! Of course, with so many businesses trying to catch your eye, there are bound to be a few really inappropriate mottos going around. The forum goons have been busy this week trying to identify some of the phrases that just shouldn't have seen the light of day. Some are rude, some don't make any sense, others are just plain stupid. But enough about the forum members, let's have a look at the slogans they found! 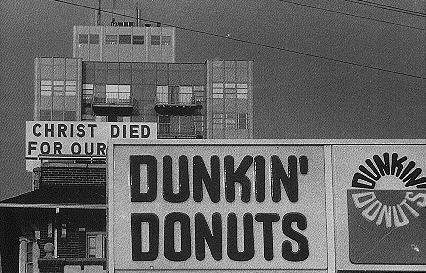 I used to live near a grocery store called The Barn.
It was your standard 24 hour grocery store, decent selection, slightly over priced.
However, that's no the point of this post.

The Barn's greatest failing (or accomplishment depending on how you look at it) is the slogan that sits on the side of the roof in letters big enough to see them from nearly a kilometer away.

The words that adorned the roof were "... now that's barn fresh!"

I don't know about you guys, but barn fresh usually doesn't describe produce, cheeses and meats. Any farmer I've ever spoken to will tell you it refers to that unforgettable aroma of manure. Not the kind of thing you want associated with your grocery store of choice.

I noticed that dairy queen's new slogan on the end of its commercials is "do one!".

For example: "New Spicy Chicken Sandwich at DQ! Do one!"

Maybe I'm just a sick, sick person, but everytime they say "do one!", I think about someone..Ya know...doing one.

I remember McD's had some banner ads not too long back for their burgers that said "I'd hit it!" and "Pound one!"

Fast food companies seriously want you to fuck their burgers.

There is a John Kennedy auto dealership near where I live.

Its slogan is "Our deals will blow you away!"

A few years ago I saw this one pickup that belonged to a bricklayer. I don't remember the name exactly, but on the side of the car it said "John Smith Bricklayers, The Best Lay in Town!"

I've noticed recently that large McDonald's cups have something to the effect of "I'M UP for it!" emblazoned on them. I spent awhile wondering why they assumed it took so much effort to drink soda that it's an exciting occasion when you're mentally prepared for it.